Fishing with Kids- BIG fun on the High Seas! 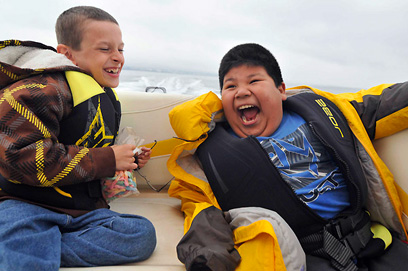 I recently had the pleasure of taking three of my students fishing. Spending time on the water together and sharing my passion for saltwater angling, adventure, photography, and technology has proven to be a great way to get to know my students. Every year I try to get as many kids as I can out on the water. 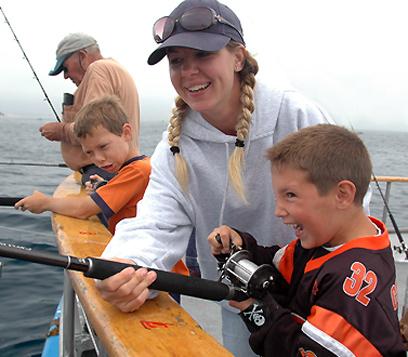 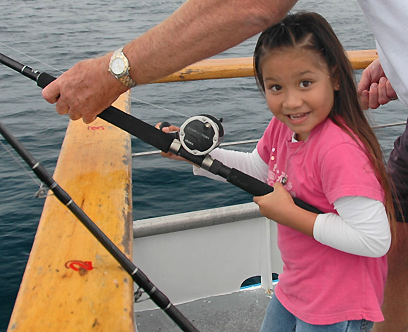 This year, the mission is the same, but the number of students has increased twofold; my 4/5 combination class has 38 students(!) It's definitely the most challenging and rewarding assignment I've had in my 13 years teaching.
I don't have a boat, so I need people to help me. My buddy Mike Proctor owns one, and he has been my salvation many times over.
Here's Captain Mike: 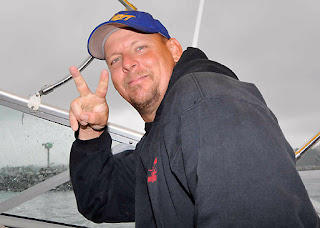 The way I met him shows what kind of a guy he is. I used to teach at a public school on Camp Pendleton Marine Base, and one of the students in my class was upset because his dad was deploying for Iraq in three days. I put out a desperate "Hail Mary" post on a local fishing chat board, asking if anyone could volunteer to take the kid and his dad out fishing within the next two days, and Mike, who I had never met before, sends me an email telling me he's up for doing it!
Lo and behold two days later Mike took out my student, his dad, and the other two brothers, and they had an awesome time fishing, all on Mike's time and tab. So that's Mike. Here's a pic of the boys and their dad on that trip just a day before dad deployed: 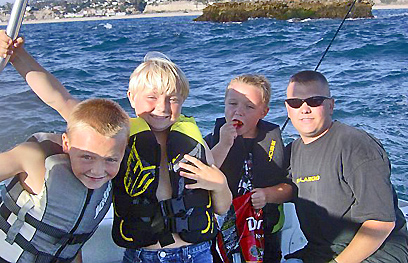 I ended up teaching all three of those boys, in fact. The one that was in my class at the time, Luke, is the one with the chips in his mouth. Here is a picture of him the next day in class telling the kids about the monster fish he caught the day before with Captain Mike!
(You'll have to excuse the quality, I took it on an old cell phone) 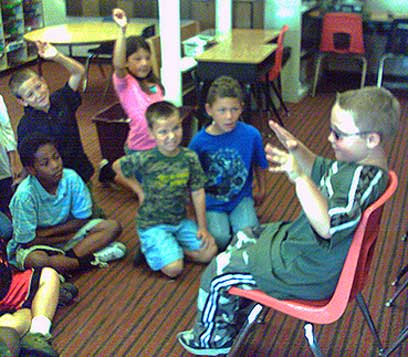 I gave Mike a call this past August; we'd been planning to take some of my kids out, and we finally found a weekend that worked for both of us. Of course I left it to the last minute, so on Thursday I announced in class that I had the chance to take three kids fishing. How would we make it fair? We decided to use a  random number generator that we looked up online. 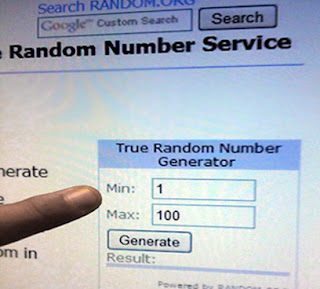 Trouble was, most of the kids that got picked by the generator ended up not being able to go. Much of that may have been due to the fact that I called the kids' parents up and asked them if they could come on a fishing trip with me with no advance notice. It also didn't help that I was speaking in flawed Spanish to many of the parents, trying to bridge the language gap . 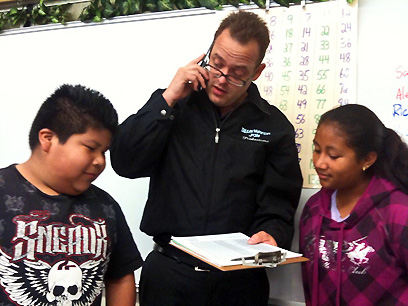 By the end of the day I had three kids who might be able to go, and to seal the deal with two, I needed to bring in a closer who was fluent in Spanish....my wife! It has to be an odd kind of situation, the parents not knowing me very well, and me being new to this school. I don't imagine they get a lot of calls from gringo teachers asking if they can take their kids out fishing on a boat for free, but after they spoke with my wife and I, they agreed to it. I felt honored. The other student, whose parents speak English, wasn't an easy sell either, but after I explained how safe it was going to be, the parents agreed.
Half of the fun was watching the kids interact. Bill, Eve, and Richy aren't exactly chums in class, but they were the right kids to bring, because they hadn't experienced the wonders of the sea. Bill in particular is a very quiet kid at school. 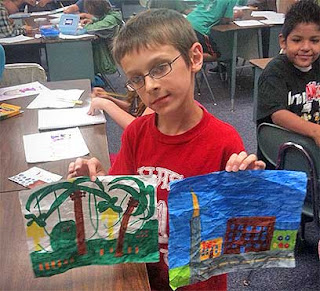 By the time we'd gotten halfway to Dana Point Harbor (which is all of 30 miles away), the kids were giggling excitedly and acting as if they'd been best buds for years. Bill, as you can see in comparing the pics from above and below, had turned over a new leaf and became the life of the party. 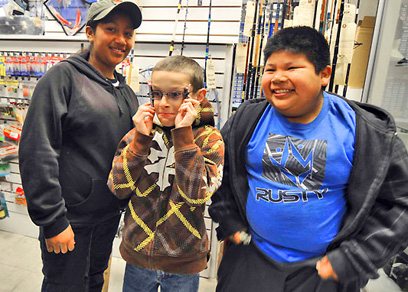 The hills to the left, shrouded in early morning mist, somehow morphed into prehistoric mountains in their minds. I had to remind them periodically where we were, and that no, those hills weren't volcanoes, and that yes, we were still in the United States. 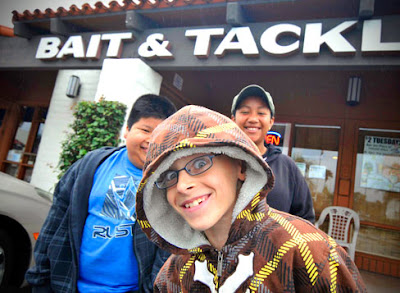 We stopped at a tackle shop to check the scene out. Mind you, we didn't need anything (Mike would provide it all) but I thought it would be a good idea to set the stage by letting them see some reels, rods, and fish mounts: tools of the trade, and reminders that were venturing into Poseidon's domain, where we'd summon equal amounts of brawn and brains in epic battles between man and monster. Or kids and fish. 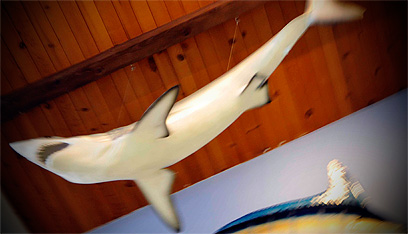 If you take the time to prime the pump by stoking the kids imagination and schooling them on what they are likely to encounter, that makes the trip more meaningful; by the time we showed up at the dock to meet our benefactor Mike and his magnificent motorboat full of gear and grub, the kids were fired up! 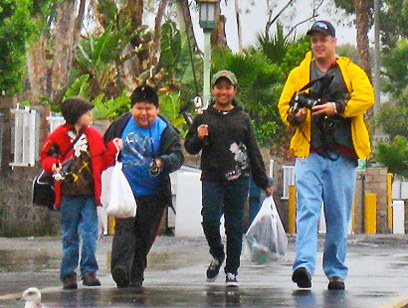 Mike fitted the kids with life jackets and I started passing out cameras and food. 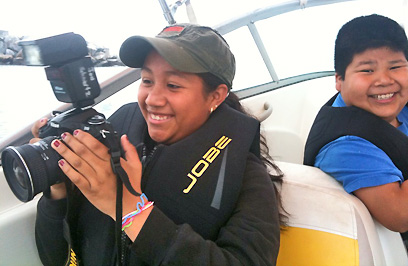 We motored out to a buoy where a single male sea lion held court with a bevy of ladies, and stayed until the stench eclipsed our curiosity. 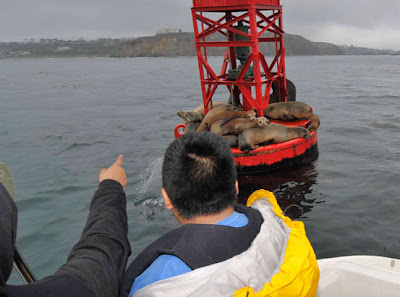 After another ten minute cruise, Mike set anchor just outside the kelp and set out some chum to attract schools of mackerel. The thing about fishing with kids is that they usually prefer action over size. Whereas some anglers are happy to scour the ocean for a chance at hooking into one huge fish, most kids prefer to stay closer to shore, pulling on smaller fish all day. Having done both I'm not sure they haven't picked the better option! 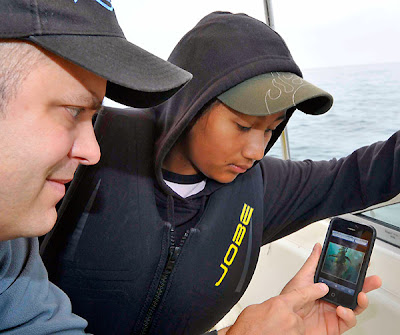 I began to explain what it was like under the kelp forest that we were anchored next to. Because the trip was scheduled on such short notice, I hadn't had time to teach them enough about the marine environment.  I decided to put the latest technology to use and bring up images of kelp forests on my iPhone! Is that cool or what? We were doing internet research in real time on the boat! Kelp is pretty unimpressive when you are on top of the water surface, but once the kids learned what it's like below, their excitement doubled. As a teacher, I felt thrilled to be able to use technology in such a meaningful way.
I actually returned to the exact same spot two weeks later to do a shoot for a fishing magazine and I got some cool underwater kelp forest pictures. That's me mired in the kelp in the first pic. 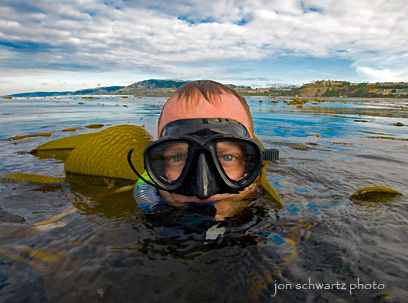 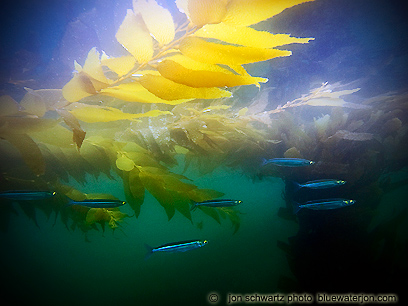 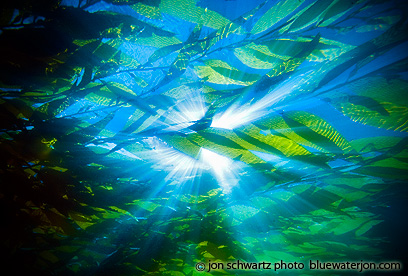 So there we were in the boat looking at pics of the kelp on my iPhone. Soon Captain Mike set up some chum (ground up fish parts) along the side of the boat to attract our "target species", the mighty mackerel. These are great fun on light tackle because it's one after the other fishing, and they school right next to the boat, so it's very visual. Within minutes the kids had mastered the art of hooking these hard fighting brutes, and chaotic contests of fury and might commenced. 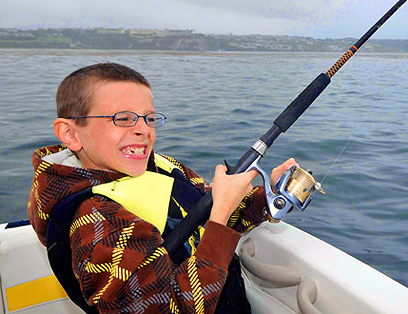 Something primeval was born in Bill at that moment; the warrior within him surfaced. I was no longer watching a child at play; I was witnessing an archetypal struggle between man and beast. Soon he had fought his foe to the corner of the boat, gaining line at times, only to watch it fly off the reel in bursts. 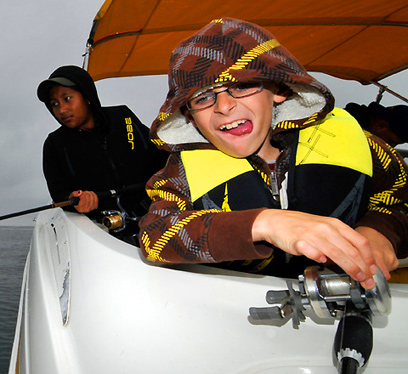 Ultimately, Bill's superior intellect enabled him to subdue the sea creature, and he hoisted his vanquished foe aboard in a bold display of strength and supremacy. 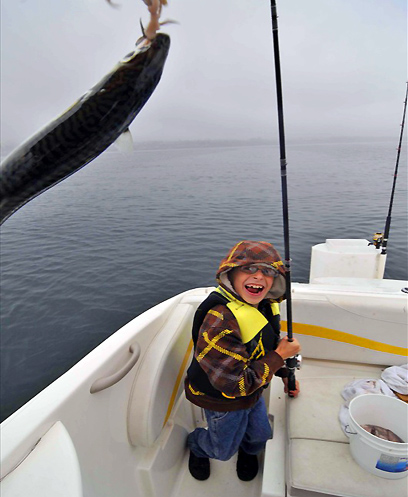 Like many of the world's strongest gamefish, mackerel exhibit a fishy taste, so we decided to put them in Captain Mike's bait tank. Soon their catches numbered many. The kids enjoyed watching them circle 'round the pen; it allowed them to savor their victory, while still permitting their later release. 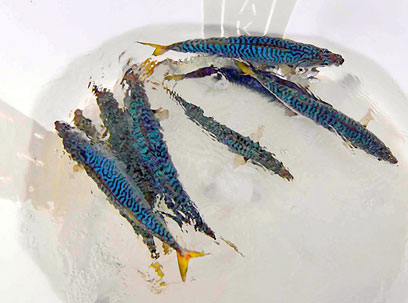 Eve and Richy boated some of the largest specimens. 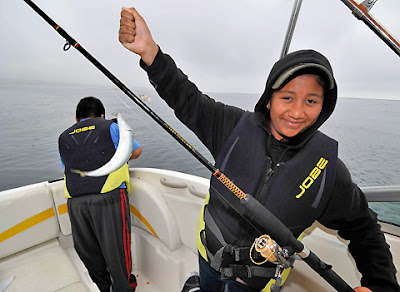 We also took advantage of another learning opportunity by examining Captain Mike's 'fish finder".   California State Math Standard Number Sense 1.2 requires that the students "Order and compare whole numbers and decimals" and we talked about how we might round 41.9 feet of depth to 42 feet, thereby doubling our chances of catching "the big one". With stakes this high, we couldn't get bogged down in whether or not we had 41 or 42 feet beneath us! 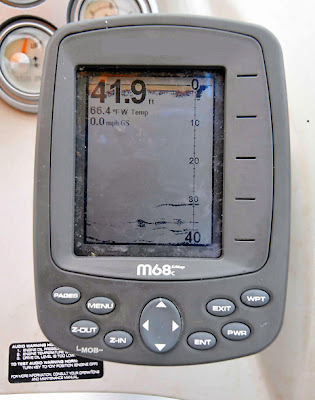 To finish off our successful sea voyage, Captain Mike brought the kids to Seal Rock and broke out the last of the booty for the kids. I'm not a big fan of junk food but rights of passage like these call for celebrations of decadence and debauchery. They earned their stripes. 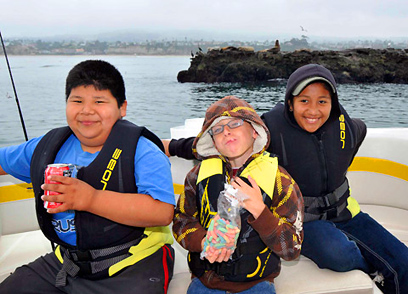 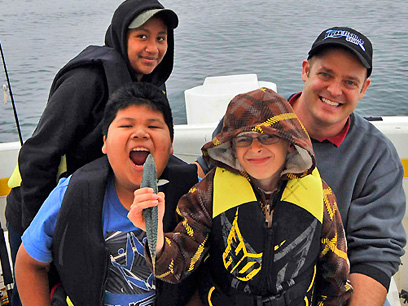 The trip provided a great many opportunities for excitement and learning, and the next day in class I had the students cap off their adventure with some writing and art activities. These would provide a forum for higher order thinking skills like evaluation and synthesis that are mentioned in Bloom's Taxonomy. Here's a sample of the work: 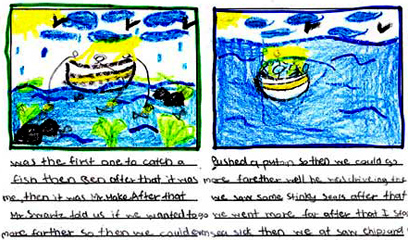 The highlight of the trip for me was watching the kids on the ride home. The kids asked Mike to push the boat to it's limits and Mike granted their wish. Richy kept falling off of the chair﻿ and together we all broke out in laughter, to the point where our bellies ached. 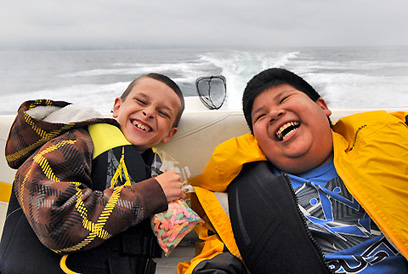 Perhaps Eve summed up the trip best in this last part of her letter to our dear friend Captain Mike:

To see more stories about Jon fishing with kids click here and here. Also, believe it or not one time I was able to arrange a free fishing trip for a family of a returning Iraq War Vet. His son was my student and you can read about that trip here.
Posted by Jon Schwartz at 6:42 PM

That's a wonderful thing you and Capt. Mike did for those kids. Well done!

Nice work Jon! Great story. I think we could use something along those lines--fishing with the family, or fishing with kids--on Active.

Great photos of the kids fishing. good to see them having fun.

I am wowed and love these photos! These are memories everyone will treasure! Awesome!

I would have LOVED being a parent or a student in one of your classes. GREAT story and photos. Thanks for sharing them with the sea and with in the world wide web.

Thanks everyone for the great comments! This blog is great fun because it's interactive and I so enjoy reading your input! Thanks again, Jon

The ultimate field trip! Congratulations, Mr. S, and to all the young fisher boys and fisher girls! What a catch! Pulling together a last minute adventure makes it even more fun, doesn't it? Special memories for all!

I think Toni Hood's next Decoder book should document the adventures of Jon and his students! I laughed out loud looking @ the kids and reading yours and their "story." Happy Holidays!

awsome! that was a good story.

oh yes!! their so cool to look at doing fishing, with pictures! i like to see them happy doing such good things together with guys!

Wow its great its very wonderful thing, this is a fabolous place for family.. good job..