I fished aboard the famous 67 Viking owned by Carlos Pellas, IGFA rep and owner of Flor de Cana Rum Company, stayed at a luxury marina, covered a tournament in San Juan Del Sur, and finished up the trip at Captain Lance Moss' Surfari Fishing Charters Lodge.
The October issue also has some great articles on the benefits of tagging marlin, how to pick the correct rods, and fishing Kenya.
Posted by Jon Schwartz at 8:21 PM 0 comments 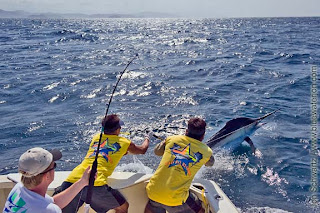 I contribute to Sport Fishing Magazine, and they have a new article I wrote about fishing for monster black marlin at Panama's Tropic Star Lodge. Here it is: http://www.sportfishingmag.com/travel/destinations/tropic-stars-black-marlin--1000076333-page-1.html
They made an extensive gallery of my photos too, which you can view here: http://www.sportfishingmag.com/gallery/A-Few-Days-at-Tropic-Star-Lodge
That's the same epic location where I took the classic jumping shot of a black marlin that ended up on cover of Marlin Magazine's August issue. You can see that cover in a previous blog post and also in the gallery of my website.
I like the article and the extended gallery format because it showcases my writing and photography. As you know, in the print articles, they can only show a limited amount of photos, but these online galleries provide a forum for showcasing the diverse types of photography that I do- action, portrait, wildlife, scenic, and architectural shots.
Posted by Jon Schwartz at 8:03 PM 0 comments 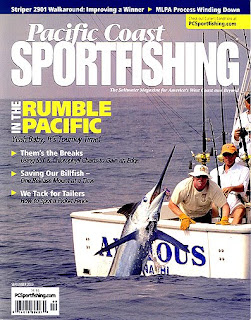 I took the above cover shot in Kona, Hawaii during the Hawaiian International Billfish Tournament(HIBT). I had planned to stay there for two weeks, but the fishing just kept getting better so I extended my stay again, and again, and again! The full feature on the HIBT that I wrote will come out in next month's issue of Pacific Coast Sportfishing. I write a monthly column in there and also do travel destination articles for them, such as the one here I wrote about Guatemala's Casa Vieja Lodge http://www.bluewaterjon.com/article/article11.html

In any case, the action for blue marlin in Kona was so hot it was ridiculous! I was out on the water with different boats for about 20 of the 30 days I was there. Most days, we scored multiple blue marlin. I was able to accompany some well known Kona captains there and interview them for future articles, including Marlin Parker, Gene Vanderhoek, and Guy Terwilliger.
I also managed to score a bunch of super rare high quality underwater shots of spearfish, the rarest billfish in the world. The images led to another article that will appear in the future in Marlin Magazine. After that I hopped on the Kila Kila, captained by Teddy Hoogs, and we went out night fishing for big albacore and yellowfun tuna. "Albies" get over 70 pounds there. We got some great content that will appear in a night fishing feature I'm writing for Bluewater Boats and Sportfishing Magazine.
Right now I am really excited to pick up the new Marlin Mag issue. It should have a feature I wrote about fishing in Nicaragua (see below posts).
Posted by Jon Schwartz at 11:27 PM 0 comments