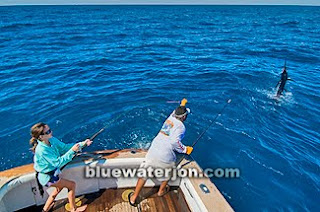 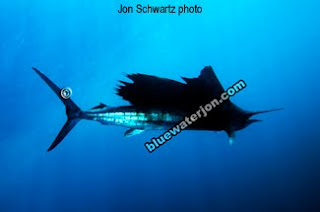 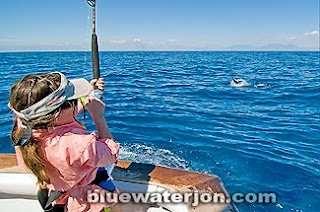 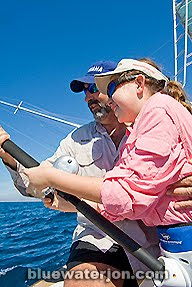 Posted by Jon Schwartz at 2:31 AM 0 comments

New Article on Fishing for Spearfish in Marlin Magazine 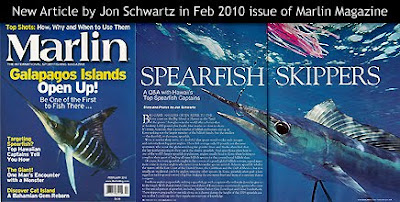 Do you know what a spearfish is? Pick up a copy of the Feb. 2010 issue of Marlin and read my feature on spearfish, the world's rarest billfish, to learn all about them. The title of the article is "Spearfish Skippers", and it has a lot of insight on how three top Kona captains fish for the shortnose spearfish. 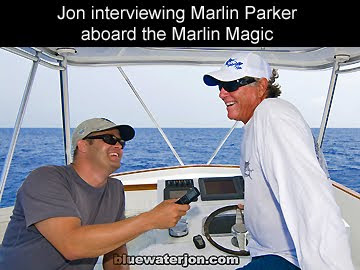 I interviewed veteran Captains Marlin Parker, Guy Terwilliger, and Gene Vanderhoek for the article, spending days with each one during the height of the season on the Kona Coast of the Big Island of Hawaii.

There's been very little written on the species. When I was tasked with writing the article, I felt a little overwhelmed, so I let the experts do the talking, quizzing them for interesting information, tips, and anecdotes. For example, Gene Vanderhoek talked about the time he hooked one on 4 pound test, and 6 hours into the fight, his potential world record fish was eaten by a giant blue marlin!!
You'll also get a chance to see some of the very rare shots I took of spearfish. Catching a spearfish is rare enough, but getting high resolution images of spearfish is much more difficult because you never know when they are going to be there. It was all about being in the right place at the right time, and with a LOT of luck, I ended up with lots of goodies, all of them taken from the water. That shot on the cover is not mine, though- it's a striped marlin taken by Brandon Cole. I wish I took that shot!
To read the article go to this link Spearfish Skippers: Fishing for Spearfish in Kona, Hawaii
Posted by Jon Schwartz at 11:58 PM 1 comments 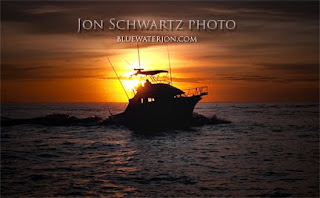 If you go to this link you can see one of my latest articles. HIBT: Legendary Hawaiian Marlin Fishing Tournament. It's on the Hawaiian International Billfish Tournament's (HIBT) 50th Anniversary that took place in July. Kona's got some of the calmest, cobalt blue waters in the world, and some of the best big game fishing on earth!
By the time you read this post there will another article of mine on newstands; it's one about fishing for the world's rarest billfish, the shortnose spearfish, and it will be in Marlin Magazine. I'm really excited to see how it looks in print. There will be many rare spearfish shots that I took above and below the water and it will be exciting for me to see how the magazine laid it all out. There will also be a shot of mine that is on the cover of Saltwater Sportsman Magazine due out in about a week.
Posted by Jon Schwartz at 7:39 PM 0 comments

Photos in new books from Guy Harvey and Rybovich Boats 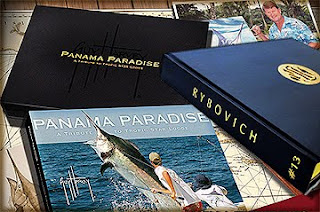 Two new coffee table books are due out soon that feature my photographs. One is from the legendary Guy Harvey, entitled "Panama Paradise: A Tribute to Tropic Star Lodge" and another was put out by the world renowned Rybovich Boat Company, simply titled "Rybovich". I  look forward to seeing these books as they come out in a matter of weeks, and it's an honor to have my work selected for inclusion. If you go to my gallery pages Jon Schwartz Photo Galleries, which happen to contain over 50 new images, you will see some of the photos that will be in the books.

This week I also submitted feature articles to Marlin Magazine and the World Billfish Magazine. The article in Marlin is about how the pros lure rigs in Kona, and the other article is about Panama. This is the second article I've written on Panama, and this one goes into Panama's history, the history of sportfishing in Panama, and reviews some of the best fishing lodges in the area that exist today.

For the Kona article, I spent many hours interviewing Teddy Hoogs, captain of the Kila Kila, a beautiful 53' Merrit, and I interviewed a wide range of people for the Panama article, including Guy Harvey.
I may end up going back down to Panama in February. I have some time off from my school teaching job ( you know I teach third grade, right?) and the places I reviewed look so spectacular, I just may have to visit one!
Posted by Jon Schwartz at 3:45 AM 0 comments