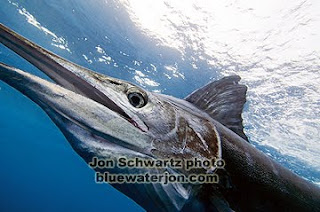 Sport fishing for marlin has changed in big ways over the past 50 years. In the old days, many anglers brought their catch back to the dock, simply to pose with it for a photo. These days, thankfully, most sporting anglers let their marlin go. Some take it a step further: they invite scientists to study the fish they release through advanced remote satellite technology. The studies are leading to some incredible findings- like this week’s discovery that one marlin caught in Hawaii traveled 2,225 nautical miles in only 94 days! 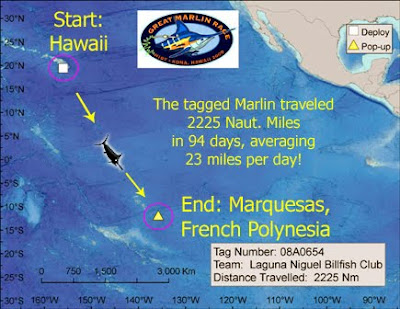 How do we know this? Marine biologists affiliated with Stanford University recently teamed up with anglers from the 50th annual Hawaiian International Billfish Tournament (HIBT) that took place on the Big Island of Hawaii in July. 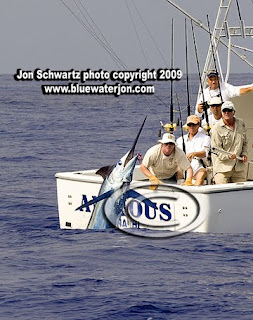 I covered the HIBT this year as a writer and photographer and witnessed some of the finest fishing the Kona Coast has seen in years. Over a 5-day period, tournament anglers caught 105 marlin, releasing 97. Eight of these 97 were outfitted with special satellite tags, and were thus entered into The Great Marlin Race. 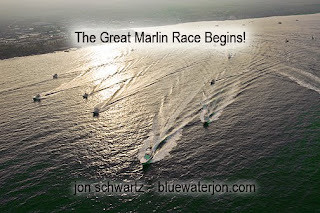 When a marlin was brought to the boat, Stanford’s Dr. Randy Kochevar told me, “A surgical steel dart was inserted into fish. A mono leader comes out and wraps around a metal pin on the tag, and that pin is made of a corrosive metal. Then the fish is released. Exactly 180 days later, an electric current passes through the pin, which corrodes within minutes, weakened by a chemical reaction with the sea.” Then the bulbous tag pops off the fish, floats to the surface, and sends a signal to an orbiting satellite relaying its location, accurate to within 10 meters! 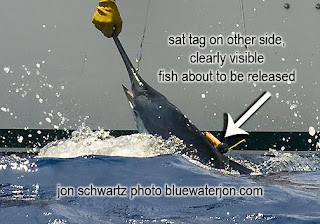 Although I spent all 5 days on the press boat and photographed multiple instances of anglers tagging fish, it wasn’t until I interviewed Kochevar over the phone that I realized I personally had witnessed these special sat tags being inserted. I scoured through my photos, and sure enough, found that I got some great pics of a marlin jumping at the transom of the Long Ranger,  which was then brought alongside the boat for a special tag! (see above photo) 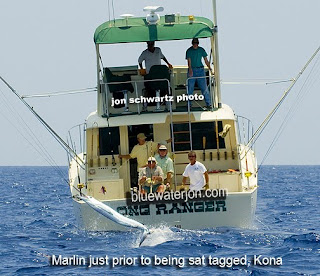 Once I found that I had these shots, the whole process intrigued me that much more. By a great stroke of luck, these weren’t the only rare photos I got during the tournament. During the first ten minutes, I managed to get some great photos of a marlin jumping behind a boat as I hovered overhead in a helicopter! 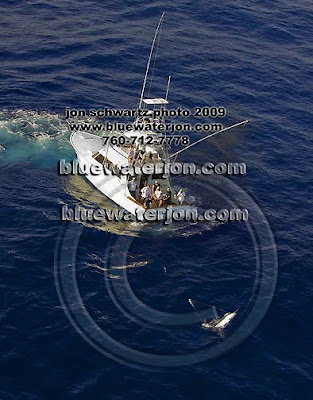 Kochevar told me that the tag records data every 30 seconds for the 180-day period, including information on available light, depth, and temperature. This data tells him where the fish has been, how far it’s been diving, and how long it stays at these depths; exactly the type of information on marlin that is lacking in our current knowledge base.


Angling teams that purchased and sponsored the tags stay in touch with The Great Marlin Race scientists through their website, http://www.greatmarlinrace.org/ . Kochevar notifies the anglers when their tag pops up. Once all of the tags have surfaced, the one that has traveled the farthest distance from the point of insertion (in this case, the HIBT’s Kona Coast) wins the competition and a free entry into next year’s tournament. 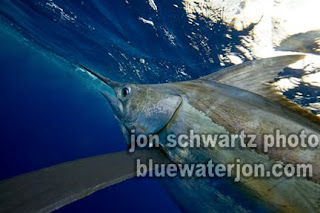 Anyway, I was talking again with Kochevar this week, and he said, “Jon, you heard the incredible news, right?”
“Uh, no, Randy, but tell me!”
“A sat tag that we deployed on a marlin at the HIBT 94 days ago just popped up and started sending data to us via satellite. It traveled all the way down by the Marquesas Islands in French Polynesia, a distance of 2,225 nautical miles from where we tagged it!” My self-centered response was “Was it the one I got photos of?”


Kochevar laughed. “No Jon, I’m afraid it wasn’t!” He then proceeded to fill me in on the details, which will continue to unfold as the tag relays data to the team over the next ten-day period.  Below is a picture of the people who sponsored the sat tag, Sally and Bob Kurz, with Ph. D student George Shillinger (left) and  Dr. Kochevar ( right). 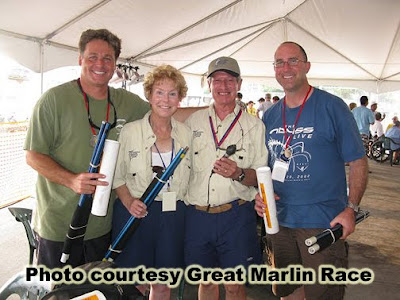 You can see the tag and the special poles it came with. Bob was the one who actually tagged the fish after it was caught by Tan Chin on board the Au'Kalani on Day 3 of the HIBT. Bob and Tan's efforts, and the incredible journey of their marlin, puts their Laguna Billfish Club in first place. Given that the other marlin still have 80 days to keep on trucking, I wonder if another tagged marlin will travel even farther?

Since Kochevar is the expert on the project, I’m going to pass the ball back over to him and encourage the curious to visit http://www.greatmarlinrace.org/.  He can answer detailed questions, and the site has lots more info on the Great Marlin Race. I’ll be checking in regularly to see all that the tag can tell us about the fish’s journey. 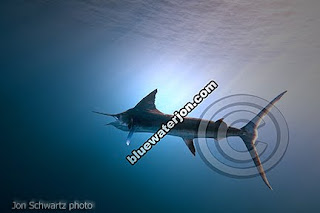 My big question is, why did it pop off early? Could the marlin have been eaten by a shark? 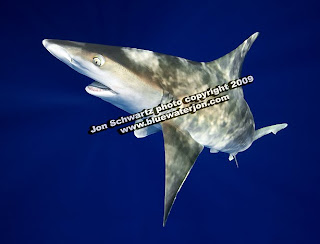 My second question is, am I the only person who wants to charter a plane to the Marquesas and see if we can’t locate the tag floating on the surface? I hear there’s a reward for recovering the device, and if the marlin was in such a hurry to get there, it must be pretty good fishing, too! I'm all up for going to the Marquesas in French Polynesia for my next adventure! Anyone else in?

I'm picturing that at some point the psat tag will wash ashore on a deserted island with one sole survivor and the poor soul will start screaming into it, expecting a rescue team to show up! 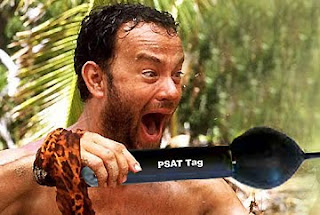