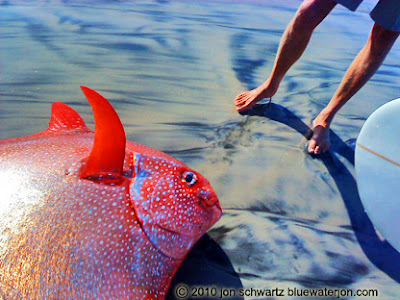 Jon Schwartz of http://www.bluewaterjon.com/ with some incredible fishing news: a large, strange looking Opah fish washed ashore in San Diego, in perfect shape! These bizarre brightly colored sea creatures are only rarely found by recreational anglers in this region, let alone in the surf; they're usually caught by longliners in distant waters, or incidentally by anglers fishing great depths. With the strange water conditions and cooler water temps brought about by La Niña this year, some commercial boats have been netting them at night miles off the Southern California Coast.  But why was it here in such shallow waters? Moreover, how did it get to shore untouched by the sharks, sealions, and other predators that exist here? Opah are delicious and go for over 12 dollars a pound! 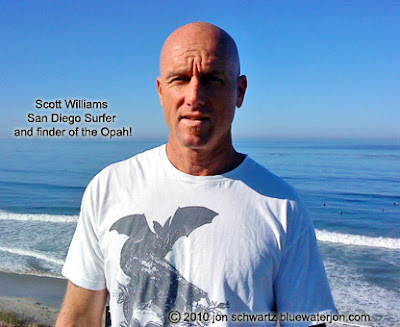 Surfer Scott Williams was on a cliff overlooking his favorite surf spot at 9:00 am Friday 9/24/10 when he and his friends spotted a manhole-sized red object floating in the water 50 yards offshore. They took out a pair of binoculars to get a closer view. Whatever it was, it may have been moving slightly. According to Williams, a 50 year old surfer who has surfed the area for 41 years, "Once we realized it was a fish, we ran down there as fast as we could!" 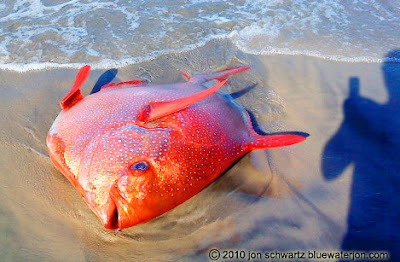 Scott is a veteran waterman, and surfs internationally. In the four decades he'd spent surfing this same spot, he'd never seen anything of that shape, color, and size. Soon the large disc-shaped object had washed up on shore. Scott took pictures of it on his cellphone. 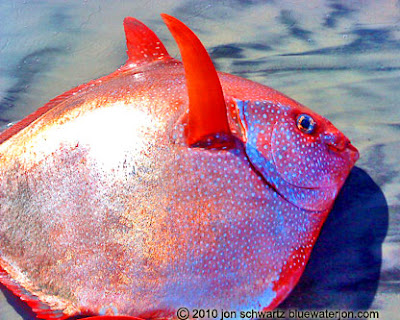 A crowd gathered around the unique animal; some suggested they might try putting it back in hopes that it would swim off, but it became obvious that the fish was now either dead, or on it's last gasp. As you can see from the photos, their unusual shape wouldn't help them move much on land. "It was a beautiful fish, and looked very healthy. We were in awe because in all the time I have spent there, I usually only see dead seagulls or pelicans washing up. Once in a while a small decomposed fish washes ashore, but this was huge, bright red and silvery with white spots. It looked like it was from another planet!" 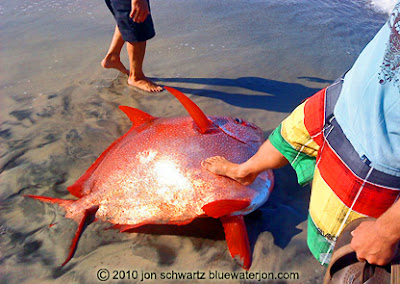 Indeed, of all the fish in the ocean, the Opah, also known as Moonfish, are one of the wildest looking. I first saw a mount of one at Rancho Leonero Fishing Lodge in Baja Mexico, and ever since then I have been fascinated by them. They are not the type of fish that you target casually and no one I know has ever fished for them on purpose. The only non-commercial angler I personally know who has ever caught one is Captain Dale Leverone who skippers a popular charter operation called the Sea Strike in Kona, Hawaii.  Here is Dale below with a 138 pounder. We know this was exactly 138 pounds because it was weighed on a certified scale at the Kona Charter Desk. 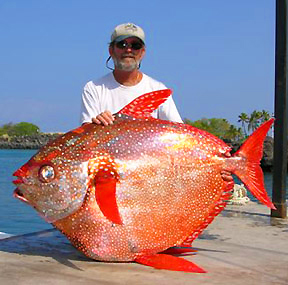 Judging by that picture of Dale, knowing his size, and comparing that to the photos of the beached Opah, I'd say the San Diego specimen is at least 80 pounds. In fact it could well be over 100. Dale happens to be one of the foremost experts in fishing at great depths for unusual fish. The Kona Coast of Hawaii where he lives is the perfect place to fish the abyssal depths, because it gets incredibly deep very close to shore. It was during one of his "deep dropping" jaunts, when he dropped a whole squid down to 1200 feet, that he landed his Opah, a catch so rare that it made the cover of Hawaii Fishing News.
I actually spent time accompanying Leverone this summer in Kona on the Sea Strike, and had a great time swapping strange fish stories. I sat listening most of the time as we motored along the Kona Coast because Leverone is an expert and I am merely an enthusiast. We made plans to hook up later this year and see if we can't fish for some other deep water oddities.
To me, this Opah incident is particularly ironic, because about 5 years ago when I was obsessed with kayak fishing, I made an action adventure DVD about catching big fish from kayaks, called "Bluewater Jon and the Giant Tuna". 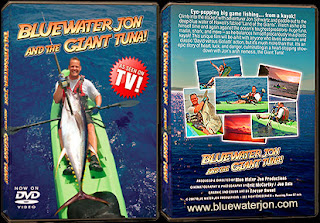 The 57 minute long movie starts with an animation sequence I painstakingly constructed that features, of all things, a dancing Opah!! I picked it because it looked hilarious to me, that an animal could actually live and be shaped and colored like that. One would think it would be an easy target, and forget about camouflage; I don't care how deep you go, pink with opalescent white spots can't blend in anywhere, right? To see an except from that Opah animation sequence and more exciting kayak fishing videos, click here:
http://www.youtube.com/watch?v=GgH1hvH3uZ8
http://www.youtube.com/watch?v=ZyS4K4J-7N8&feature=related
http://www.bluewaterjon.com/video.htm

Back to the "Opah Incident": As you can see, this isn't as if any old sea creature landed on a beach 5 miles from my own house- I've long had a fascination with these marvelous fish. I've spent the last several years photographing large fish like sharks, marlin, sailfish and tuna above and below the water (see my galleries at : http://www.bluewaterjon.com/photogallery.htm) but one of my biggest fantasies is to come face to face with one of these amazing Opah.  I don't suppose it would jump out of the water next to me like the sailfish below but I'd be so excited I wouldn't much care.

The only time I have ever seen an Opah is in fillet form at the seafood market; they are delicious! Had Scott Williams known this, he may have thought twice about leaving the large, seemingly healthy fish in the sand. "We thought it might have been a sunfish, and then someone said that sunfish are poor eating, so we just left it there."  Then again, who knows why the fish ended up so, uh, washed up? ( For my 4th and 5th grade students reading this, that's called a pun!) Eating fish you find on the beach is probably not the smartest way to cop a free meal.
I found out about the Opah Incident when I saw Scott at a friend's party on Friday night. He came up to me and said, "Jon, you know your fish pretty well, what is this?" My eyes bugged as soon as he showed me the pics on his cell phone. "Omigosh! It's an Opah!" There must have been a lot of surfers at this party because another one of our friends overheard us and showed us photos he took of the same fish in the sand later in the day. By that time the fish's beautiful colors had faded. I'll try to get those photos too. Word has it that someone carted the specimen away; I hope it went to a scientist who can make sense of the "Opah Incident"!
I'll try to follow up this interesting story with interviews of some marine biologists I know who might be able to make some sense of this all.
Stay Tuned,
Jon Schwartz
Fishing News, Travel Articles, and Photography

Fascinating story, Jon. Thanks for sharing it.

this is incredible! growing up in Alaska we saw some awesome things, but they didn't have these kinds of colors. GREAT story!

Very strange and interesting fish incident in San Diego beach. Thanks for sharing! Cheers and have a Good Day!