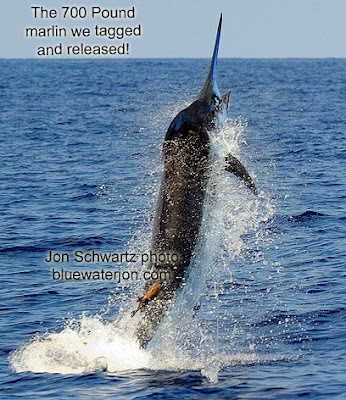 This is Jon Schwartz here from www.bluewaterjon.com. By now you know the story of how our little press boat was rammed by a 550 pound blue marlin on day 2 of the Hawaiian International Billfish Tournament (HIBT). Incredibly, the story was on the front page of Yahoo for two straight days. Talk about being in the right place at the right time!
In fact, that wild episode turned out to be only the first chapter of a crazy week in Kona. Two days later, our press boat hooked, fought, tagged, and released an even BIGGER fish, providing for a terrifically ironic twist to the prestigious tournament. 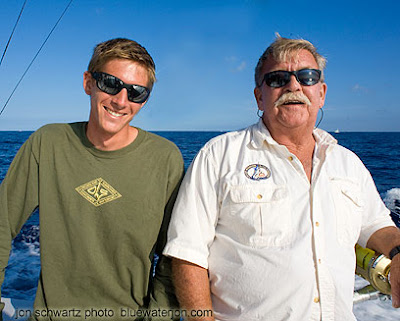 On this 4th day, myself, mate KJ Robinson, and Capt. B.C. Crawford were joined Kona photographer Charla Thompson.  As you will see later, we were lucky to have her aboard. I greeted the guys with a hug upon boarding the boat; through our wild experience the other day, we'd grown to be fast friends overnight. We remarked on how lucky we'd been to see that marlin going wild, and I was happy as a clam to have gotten some photos that were gaining some attention in the news. (Funny thing is, I haven't even shown many people the best ones!).
Charla and I climbed up into the bridge as we left the famous Kailua Pier so we could get some shots of the boats as they streamed out to find the fish. 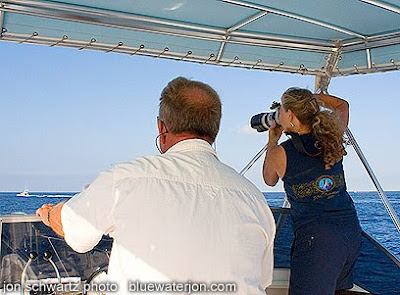 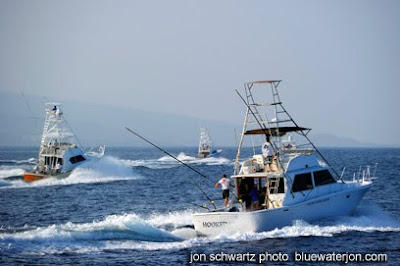 While Charla is an accomplished Kona portrait, event, scenic, and wedding photographer, she doesn't spend a lot of time on fishing boats. She was looking forward to an exciting day, but was also aware that the odds of us witnessing anything truly spectacular were not high. Fishing photographers like me sometimes spend weeks on boats without getting a single good shot; magic can happen at any time, or only once in a great while. I've spent entire trips in big game fishing hotspots and come away with nothing. 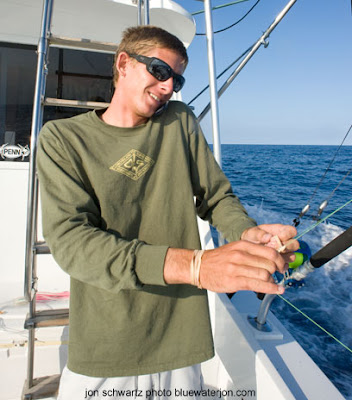 Now, you may have surmised that we were a naughty little press boat. Press boats have one job: to wait until other boats are hooked up, and then jet over to them in hopes of getting shots of them with their fish jumping near the boat. Press boats ain't supposed to troll lures! But this being 'The Land of the Giants', many HIBT press boat captains and their mates find it impossible to resist deploying one or two lures, just in case...

For this reason, I wasn't surprised when KJ started deploying lures, again. As you can see in the above photo he did it with a grin while talking on his cell, the mischievous fellow! Then again, what harm could come of it? I sure didn't speak up in opposition, especially after our incredible episode two days prior, and I figured that the odds were against us hooking anything again.
So we're trolling lures, the sun is out, and the water is incredibly calm with just a slight breeze; just the conditions that make Kona such an appealing fishing location (BIG fish, calm waters). Less than an hour into our day, one of our reels starts screaming again, and guess what? A giant marlin starts jumping behind our boat!! Can this really be happening?!! 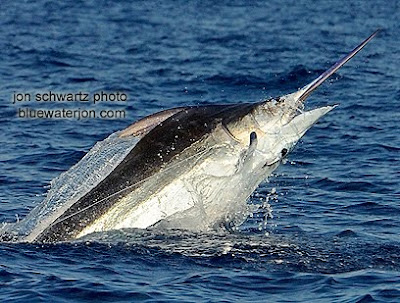 As you may recall, the marlin that rammed our press boat two days earlier had been estimated to be 550, or even 600 pounds. (In fact, B.C had called it 550, and renowned angler and Director of the famous Lizard Island Black Marlin Tournament, Bob Lowe, who witnessed the entire spectacle, estimated it at 600!) Now B.C. is calling the one we have on 700 pounds!!!
It took some fantastic leaps, and thankfully, didn't charge the boat like the one we had one two days earlier. (And to be fair to that fish that "attacked" our boat two days earlier, it wasn't an unprovoked attack, it was doing what it felt it needed to do to get away. Had it only known that we planned to tag and release it..... but I'll revisit this interesting issue in a later blog post and include exciting accounts and video interviews taken from several experienced eyewitnesses).
Now back to the present fish! Of course, we have no anglers aboard; Charla has little fishing experience and although I do, I'm hesitant to put my cameras down, so once again, mate KJ hops into the chair and starts battling the fish. To his credit, the only help I gave him was the occasional sip of water and a turn of his fighting chair. 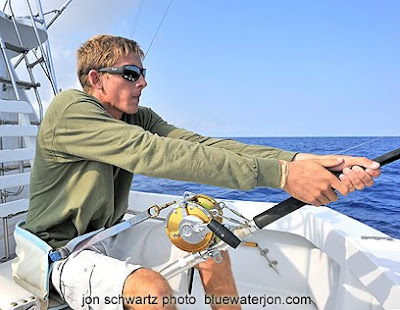 As if the irony of our little press boat being hooked up to the biggest fish of the tournament wasn't enough to blow minds, I get a call at this very moment from Peter Fithian, the venerable and esteemed founder of the HIBT. I thought he might have heard that we were hooked up again and was going to tell us to quit being such rascals, but he hadn't yet heard the news; he was calling for another reason.
"Hi Jon, this is Peter... I wonder if you wouldn't mind speaking with a reporter from a TV station in Honolulu about your encounter with the marlin the other day?"
"Peter, I'd love to, but there's a big fish on right now and I can't talk now!" I yelled into the phone.
"Who's hooked up, Jon?"
"WE ARE, PETER! GOTTA GO! TALK SOON!!!"
Back out to the deck I ran, trying to see if the huge fish would jump again and provide Charla and I with some more photo ops. KJ kept fighting the fish with great strength and vigor, applying as much drag as his 80 pound tackle would let him. The line grew so taught that it made whistling sounds as the air blew over it, and it cut zigzags through the water, making an incredible pattern on the surface that portrayed the tension of the moment. I tried to capture it on my camera: 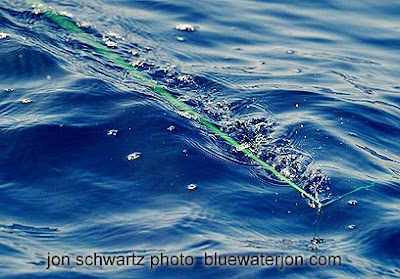 This was a truly incredible fish with immense power reserves, and every time KJ would get it up to the boat, it would light up in glowing shades of silver, teal, and blue and take off on another run. It became clear that KJ and B.C. wanted to be able to claim the fish as an official catch and release for the boat; big fish caught on boats are basically their resumes. But before they could claim it as an offical boat catch and release, a tag would have to be inserted into the fish, hence the term tag and release. 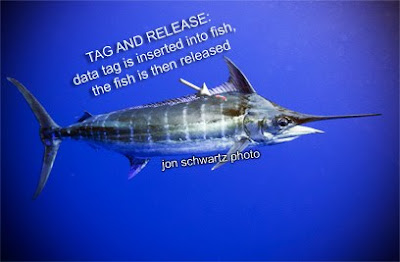 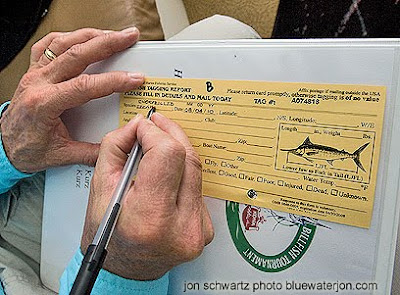 These tags contain data on them which is then recorded once the fish is tagged, and then an official tagging report is sent to an organization that keeps track of these things. If the fish is caught again, they can use the information on the tag to assess things like how far the fish has traveled and how much it has grown, all information that can aid in protecting and maintaining healthy stocks of billfish worldwide. (For more information, see The Billfish Foundation's website at www.billfish.org. TBF is a non-profit organization dedicated solely to conserving and enhancing billfish populations through the world).
We were now faced with a dilemna: who would tag the fish? I'd come all the way out here to get pictures of fish, so I was not eager to put my cameras down and miss the shot of this fish jumping out of the water at boatside, but at the same time, no one else could do it.  Eventually I put my camera down, joined the team, and talked strategy with KJ and BC. We agreed that once KJ took a wrap on the leader, I'd follow behind him and insert the tag. Although I'd caught small marlin from kayaks and released them, I'd never bothered to tag them, so this would have to be a first for me! You can bet my adrenalin was pumping; I wasn't so much afraid of the giant fish as I was about screwing things up for KJ and BC! 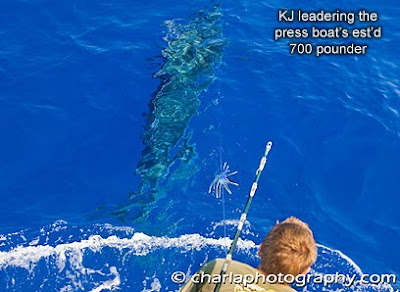 After one hour and ten minutes of fighting the fish, KJ made put the rod in the holder and grabbed the leader, but the fish still had way too much energy and wasn't ready to be leadered. It's tail lit up everytime it got close to the boat and it shook it's massive body like a giant bull. This was one huge animal! In the above picture that Charla took, you can see KJ struggling with the mighty fish at the stern. Finally he led the fish to the port side of the boat and took several wraps with his gloved hands. I followed right behind him, determined not to let the guys down and ruin their chance at glory. The moment of truth had arrived! 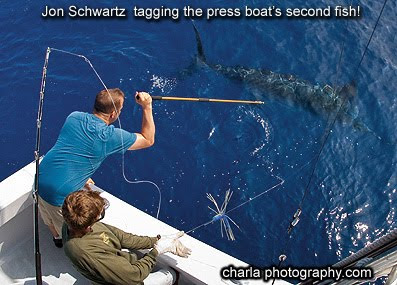 "Tag the fish! Tag it!" screamed KJ. I leaned over the rail with the tagging stick and readied myself, but to my inexperienced eyes, it seemed that the fish wasn't close enough for me to implant the tag. I'd seen some trained mates blow it and either miss or send the fish flailing away from the boat. I sure didn't want to botch the job, annoy the fish, and send it racing away from the boat in another desperate lunge; that might put KJ in a bad spot!
"But shouldn't I put it just below the dorsal fin in the shoulder? What if I put it in the wrong spot?"
KJ was insistent:
"JUST DO IT!"
Now I really felt the pressure! Realizing that I'd be better off screwing up by following his directions than hesitating and messing things up on my own, I committed myself to the act, leaned over once again, and followed through, sticking the tag solidly into the fish. The below picture gives a good feeling for just how big that marlin really was!  Not a 100% perfect spot for the insertion of the tag but considering the circumstances I think it worked out OK. At least it was close to the dorsal fin! 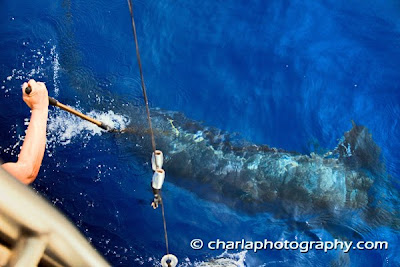 Thank gosh Charla was there to get the photos because I don't think anyone would believe that we actually pulled it off. Of course, I did almost nothing; KJ perfectly executed the job of both the angler and mate, and BC did a great job of positioning the boat. When the 550 pounder rammed our boat two days earlier, there were many experienced witnesses, including Captain Kevin Nakamaru and angler and respected Australian tournament director Bob Lowe, but this time we were all alone, and showing back up at the Kailua Pier with an a tale about an even bigger fish was definitely going to arouse some skepticism. But as you can see from the photos, as fantastic as the story is, it's all true: the little press boat was the luckiest boat on the whole Island of Hawaii! All hail Captain B.C. Crawford of the mighty Chiripa and his mate KJ Robinson!
Note: Be sure to check back soon at my blog Jon Schwartz's Fishing and Travel Blog for the great stories I have to share about what happened after the HIBT ended! Think sharks, big ahi tuna, and two marlin underwater at the same time, with one of them free swimming!! If you have any free time, also check out my site www.bluewaterjon.com for more cool fishing and travel stories and photographs.
Posted by Jon Schwartz at 1:32 AM

Well done, Jon
Not only are you a world-class gamefishing photographer, now you're an accomplished deckie as well!
What a great week you had - and you've captured the excitement, and anxiety, really well. I can't wait to see the rest of your spectacular shots.
All the best,
Tim
Editor: BlueWater magazine