Swimming with Humboldt Squid: Photos and Pictures by Jon Schwartz

Swimming with giant schools of Humboldt Squid at night is creepy! Saturday I drove to Newport to try free diving with the Humboldt Squid that have invaded Southern California. These strange sea creatures have been washing up on nearby beaches, and untold thousands continue to lurk in boiling masses just offshore. Unlike the cigar-sized market squid that I encountered in June at La Jolla (click here to read that cool story), Humboldt Squid can be dangerous and I wondered if it was a good idea to get in the water with them at night. I've seen videos of them attacking divers, and in fact have spent a lot of time over the past decade seeking out every last bit of information about people that dive with Humboldts. The encounters are fascinating. After calling several experts, I decided to give it a go. It turns out that this particular population of Humboldts was just the right size for me to investigate without having to worry about getting dragged down, body slammed, or chewed on. Actually they might chew on me a little bit.
The ones off Newport are about 2-3 feet long, and the biggest Humboldts can get 6 feet long and over 100 pounds. This might seem huge, but Humboldts as a species aren't even close to being the biggest squid in the ocean. Colossal Squid can get as big as a school bus, but they spend their time in the depths fighting off sperm whales in epic battles (or are those Giant Squid?) Here are two images I took off of Wikipedia. One shows a depiction of a sperm whale fighting a massive squid, and the other illustrates the relative sizes of Colossal and Giant Squids. 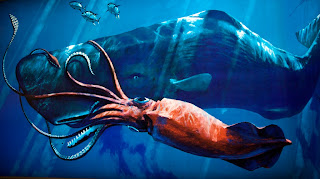 Sperm whales have been found on beaches covered with scars from the tentacles of massive squid, and their stomachs have been found to contain thousands of squid beaks.  Here's an old classic photo of a whale marred by squid tentacles. 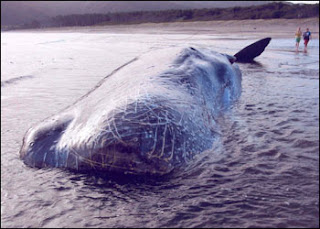 Compared to these leviathans, the market squid I came across in La Jolla in June seem tiny. Here's one in my hand, and then a shot of them balled up in a school: In any case, back to my more recent squid adventure. I guessed that unless the Humboldts in Newport ganged up on me, I'd be OK near the surface if I stayed close to the boat. These squid do have beaks that can take nasty bites, and their tentacles have sharp pointy things that rotate on them, but dogs can bite too, and I don't see people staying indoors on the off chance that they're going to get attacked by Fido. Maybe that's not the best analogy, but maybe you see my point. Compare the amount of people getting mauled by squids to the number mauled by dogs, and the result isn't even close. Just after nightfall, we headed out. The bioluminescence from the red tide glowed a striking blue beneath our boat. Finding the squid boats was easy; there was a flotilla lit up like a football stadium just outside of Newport Harbor, including open party boats stuffed to capacity with eager anglers, private yachts, and commercial squid boats that net them by the ton.
Here's some photos of a party boat: Notice the anglers are wearing rain gear. This is to protect them against the squid that shoot geysers of ink and saltwater into the air. You can see them getting blasted! I had hoped to find them schooling at the surface, but most of them lay at depths below 20 feet, which is just out of the range of my camera housing. I was able to see some in plain sight, and others remained invisible until they began blinking on and off like a strobe light. They can turn colors quickly, and I imagine they communicate with light. I jumped into the water, which was illuminated by the squid lights that the boats set below their boats.

This is what that water looks from below the surface: As I was taking a picture of one that was hooked up to a fishing line, I was approached by a free swimming squid. This was what I had come for! My underwater equipment isn't really made for night photography so most of the time when I pressed the shutter, my strobe blinked spasmodically but my camera didn't take any pictures. I did get a precious few shots of this squid.  I'm not a squid expert but it seems to be an aggressive stance; check out how the tentacles are thrust forward at me. Was it waiting to strike, or was it merely checking me out? Someone who has dove with them referred to this as "attack mode" but again, I'm not a squidologist. I'd love to hear from some real experts as to what this stance means. If there are any out there please email me or add a comment to this blog. I'll post more when I get a chance. I'm looking forward to a hands-on science lesson I plan to conduct with my first grade students. We'll use the one squid that I brought back from the adventure. I enjoy using fishing and marine science to engage my students in class and you can see an example of that here. Below is a sample of our class work from today (9/29). It combines our work with temperature, reading, writing, science, and art. Fun stuff! 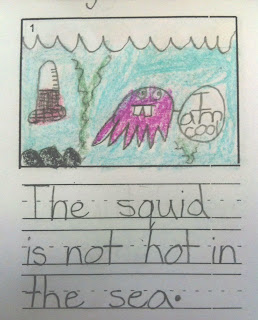 One of the neatest things about this Humboldt Squid encounter is that it marks the second time that I've been able to luck get neat photographs in an area close to my San Diego home. When I am not teaching school I often travel to locations like Hawaii, Mexico, and Panama for travel articles and big fish photos of game fish like marlin, sailfish, and tuna.
Here are some photos from my recent trips: Kona Captain Teddy Hoogs, the Puerto Paraiso Mall in Cabo, and a striped marlin up close in the East Cape of Baja Mexico. 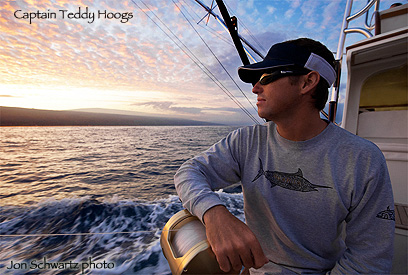 To see my travel, scenic, and fishing photo galleries, click here.
To read my fishing and travel articles, click here.
I used to catch and release marlin from kayaks and you can check that out here.
Photography Enthusiasts Take Note:
If you "Like" my Facebook Page Jon Schwartz Fishing, Photography, and Travel you might win a rare fine art print from my collection.
On October 10 I will randomly pick from 3 people who "Like" my Facebook page, and the winners will receive a FREE 16x20" gallery quality fine art print from my private stock! I sell these for 500.00 to private collectors so this is a neat opportunity.
Click here to see details.
Thanks!~
Jon Schwartz