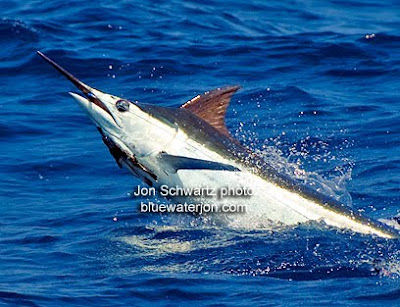 Jon Schwartz here from bluewaterjon.com reporting from Kona, Hawaii, at the headquarters of the 2010 Hawaiian International Billfish Tournament ( HIBT), scheduled to begin in less than 24 hours. The tension is mounting as the anglers are meeting downstairs in the ballroom, where they are drawing random lots to see which boats they will be fishing on this week. One of the cool things about this tournament is that you can't just show up here with a gazillion dollar boat and top name captain and sweep the thing; everyone gets a fair chance at drawing all the boats. 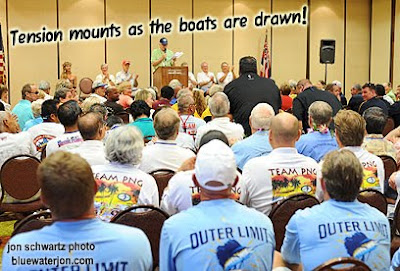 And of course, just because a team draws the boat they wished for on day one of the five day event, doesn't mean that will translate into victory. Boats viewed as 'cock of the walk' one year have ended up as feather dusters the following year! To that end, to try and get the best fishing photography I will be in the press boat, following the action wherever it is. I could try and glom onto a certain boat with my cameras, but I stand a more even chance of finding action on a chase boat. Once a hookup is called into tournament headquarters, the captain of the press boat guns the engines and brings us photographers over to the action- and hopefully it's in full swing when I get there! In comparison to other fishing tournament locations, the boats here in Kona are in a fairly compressed location, pretty close to shore, so theoretically it's a good place to be in a press boat for a fishing photographer like me. But there are times when a boat hooks up in an area that's 45 minutes away, and the press boat captain has to make a judgement call: is it worth it to jet all the way over to where that boat is hooked up? Won't it be over when we get there if it's too far?
The great majority of the time, we hear about a hookup, and the captain goes into full throttle, only to throttle back down 30 seconds later. So many things can go wrong with a hooked fish, where the line can break, the hook can pull out, that we on the press boat get lulled into a sense of wondering if it's just another false alarm. Tension climbs and then drops precipitously. 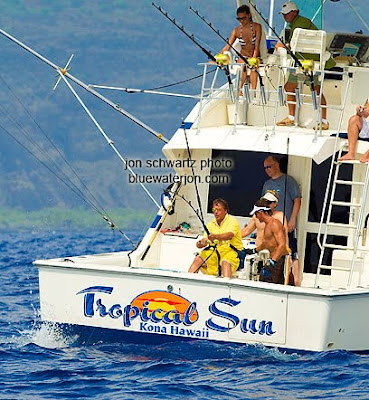 Funny things happen, too. Two years ago, there was a big fish hooked, 40 minutes north of the press boat. After days of gunning the engines and cutting them off seconds later when the fish got off, we on the press boat decided that there'd be no way the fish would still be on when we finally got there. BIG MISTAKE! It turned out to be a 973 pound giant blue marlin that put on an incredible hour long display of tailwalking and aerial jumps. It was captured on video by the Hawaii Goes Fishing TV, whose editor happened to be aboard, but no photographers witnessed the big fish mayhem. Needless to say we were all kicking ourselves in the foot for deciding against the trek toward the hooked up boat; we'd missed the chance of a lifetime! 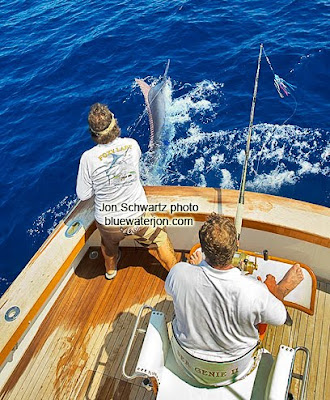 In addition to my blog being an on the ground reporting of the HIBT, I am writing it so that it's like a multi-chapter article on the how's and why's of big game fishing. because it's an ongoing discussion and I will be referencing prior posts,  I encourage you to read past posts so you can get the whole picture. I left off yesterday talking about how the anglers, mates, and captains do a lot of lure fishing here. They troll various resin and plastic lures rigged with material that makes it mimic baitfish, hoping to entice strikes from the target predator, the giant pacific blue marlin. These fish can reach almost 2000 pounds! Some of the best captains in the world live in Kona, and I have been impressed with how much attention they pay to every minute detail when prepping their gear. 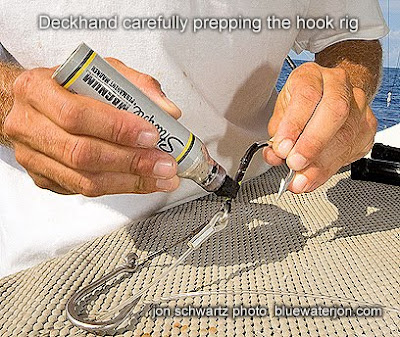 When I was on the Kila Kila, Captain Teddy Hoogs and his deckhand rigged a lure that looked awful pretty. They spent over 30 minutes on it, getting everything just right. Notice that the darker sides of the lure head (the shiny plastic knob on top) are lined up with the darker sides of the plastic skirt. The fellows even went so far as to use purple tape underneath! They then took a marker and blacked out any exposed shiny metal on the hook ( actually I didn't have a pic of them doing it so I used one of Captain Marlin Parker's mates at work on Marlin's boat, the Marlin Magic II. I think that was partly to hide the hook, to add some rust prevention, and also to possibly let him know where the hook might need sharpening if it came back after a fish hit it. 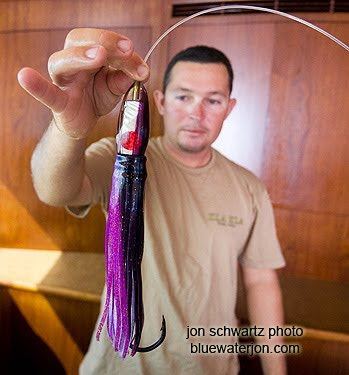 Well, right after Teddy's deckhand showed me the lure, he said half jokingly, "Watch it get hit when I put it in the spread of lures!" and guess what happened??? IT GOT HIT IMMEDIATELY!
Coffee break time, be back in a jiff with the rest of the story, and more...
Posted by Jon Schwartz at 1:48 PM