I wrote an article about some of the great fishing adventures I had in Kona, Hawai this past summer for a really cool online magazine called Marlin World. The web has completely changed publishing, and Paul Watson, the editor of Marlin World, may well be onto something we'll see a lot of in the future. One can visit his website or subscribe to the free mailing list, and then you are can view the publication on your computer. The cool thing is that it reads much like a magazine- a virtual magazine. The pages flip with the help of some fancy dancy computer program and you can zoom in and out, and also watch videos imbedded on the page. It's interactive. Videos play as you are reading text above and around it. Pretty wild!

In any case, in the article I talked about the great times and luck I had photographing marlin, sharks, and other big fish from all sorts of vantage points in Hawaii, including face to face underwater (that's how I got the cover shot of the blue marlin that you see on the cover of Marlin World) and even from helicopters. Tell you what, between the pic I took of the marlin for the cover, and the self portrait I took above, I think it's pretty safe to say that I'm uglier than a marlin. Like, way uglier. Is that sad or what? Maybe if I got a hairpiece.... 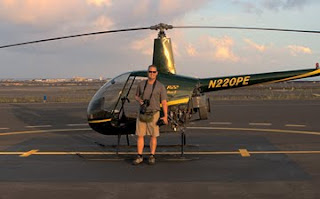 But I digress. Back to the Kona trip... I got so lucky that on the very first helicopter ride of my life, I witnessed something possibly only a few people have ever seen from above- a marlin jumping out of the water behind a boat!

The bizarre thing is that, as I noted in some hastilly scribbled text on the above photo, this is a photo of a marlin, jumping behind a boat called "Marlin Magic", owned by a famous captain named Marlin Parker! ( That's not something he calls himself, his dad named him that. His dad caught the first recognized blue marlin in the Pacific in, I think, 1954, and then months later had a baby, so naturally he named him Marlin.)  In fact, right now I am penning a series of articles about Captain Marlin Parker and his fishing techniques for a fantastic magazine called Bluewater Boats and Sportfishing. I was lucky to have one of my photos chosen for their cover earlier in the year- a shot I took of a sailfish being released in Guatemala:

The first article I write for Bluewater Boats will be on Captain Marlin Parker's fish fighting tactics. In reviewing the tapes I came upon a story of Marlin's that blew my mind; he and a friend were chasing the world record, day after day, when they hooked into a MONSTER that was "way bigger" than the 1400 pound behemoth he landed at another point in his career. He and his friend fought this fish for 23 hours and, well.... you'll have to find the rest in upcoming issues of Bluewater Boats!
Now if you don't mind I am going to share some photos that I took in Hawaii last summer. My wife and 3 girls were there with me for two of the four weeks I was there, and we had a great time hanging out and sight seeing.  Seems like no matter how far we go from home, all my girls ever want to do is lounge in the pool! Then when I chase after them with the camera they tell me all I ever do is want to take pictures. Below is a picture of them chillin' at one of their favorite places, the Sheraton Keauhou. Now here's a pic of them at the Hilton Waikola: One of these days I am going to write a major tome about all of the cool things to do in Hawaii. They have an active volcano and they also have inactive ones. You can take hikes through the tubes that the lava used to flow through. This is one of the pics I took that I like the best from that area
( Hawaii Volcanoes National Park) They had these awesome flowers there at the Park ( it's a huge place, like Yellowstone, so when you hear 'park' don't think like the postage stamp place down the street from you where the kids play). Anyway I spent hours photographing these flowers. Then the problem is I get hundreds of nearly identical shots and can't help but look at each one carefully to pick the "best". Moreover, I snuck over a rail to get some of the flower shots, my expensive shades fell out, and I immediately stepped on them. The curse of the sunglasses repeated itself at Tropic Star Lodge in Panama not more than 4 months later. And here's your standard. guy throwing flaming sticks in midair and then catching it in his legs shot. And then we'll wrap it up with a picture of my youngest daughter at a luau. Her name is Leilani, it's a Hawaiian name and it means flower from heaven: