Fishing for Marlin and Dorado in Cabo 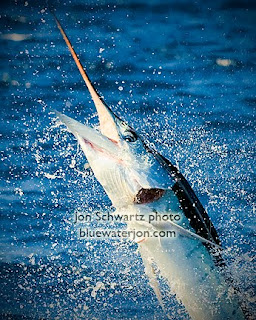 Lots of tailing striped marlin! The first three days of my trip I accompanied a very experienced angler named Gerald Richmond, a member of the IGFA and TBF (Billfish Foundation). We were on he 31 foot Rebecca, one of many fishing boats in the Pisces Sportfishing Fleet.
He's been fishing with them for 15 years as a client, and has caught over 500 marlin in his 79 plus years! Gerry baited up 16 and caught two on our first day. We went about 18 miles north of Cabo, maybe a bit more than halfway to Golden Gate Bank where the striped marlin bite went crazy the past 4-5 years. The fish were no more than 3 miles from shore. 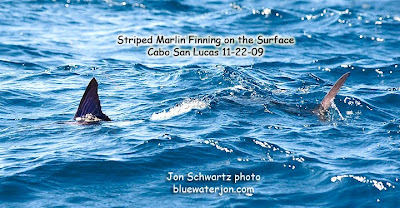 The bait was goggle eyes/caballitos and Jerry used spinning tackle to sight cast to them as they swam around in full view, so it was quite exciting. Once they saw the bait, they either sank down or lit up like a Christmas tree and bit.
On board was his fiance Claire who is 73, another experienced angler. Both hail from Islamorada, Florida.
The dorado bit is close to wide open, with bulls averaging 15-20 pounds, caught on jig strikes and bait. Of course all marlin are being released! When you see a red flag with a white "T" on it that means the fish was released, so on this particular set of flags you see two marlin flags ( blue), two release flags, and a dorado flag. Jerry actually released most of his dorado too, but kept a couple for us to eat back at the Marine.
There are many restaurants like"Captain Tony's" right next to Pisces Sportfishing on the marina that will cook your catch. Quick fact- did you know that the marina here in Cabo is one of the most expensive and luxurious in the world? 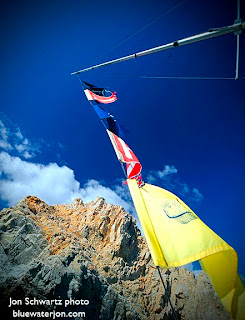 Here's a shot of Land's End that I took on the way back. This is the spot at the very tip of Baja where the Pacific meets the Sea of Cortez. A most beautiful spot, this pic actually doesn't do it justice, it was taken on the fly.. 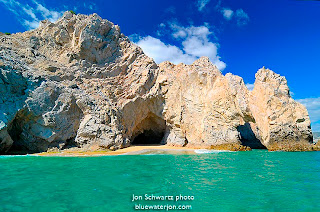 I have been staying at some wonderful hotels. After 3 nights at Casa Dorada (see previous post) I found myself at the luxurious Marquis Los Cabos Hotel and Resort

The place is amazing! Here are a couple of quick pictures I took. As soon as I was taken to my room overlooking the Pacific I whipped out my camera because the from my balcony was equisite. Hopefully I captured some of the beauty in this photo (click to enlarge) 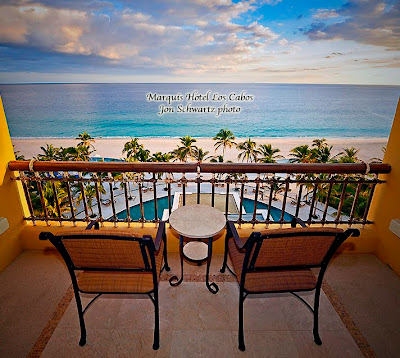 I took some other ones, and have plenty more I will be sharing. As much as I love fishing and underwater photography, I love photographing architecture and scenery. Resorts like this give one plenty of opportunities to take nice photos. Below is one of their restaurants. If you can believe it, it's the least fancy of the two they have!! 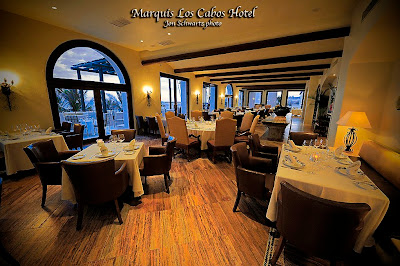 And then a few shots I took by the pool: 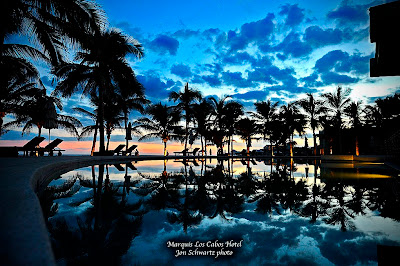 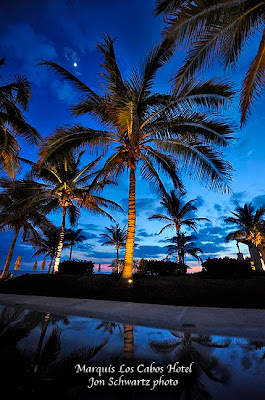