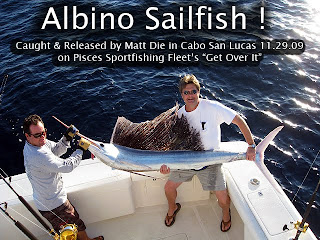 
Sailfish are one of about 9 species of fish known as "billfish". All billfish have long pointy bills at the tip of their nose. Sailfish aren't as big as some of their cousins, like the broadbill swordfish or blue and black marlins that can weigh over 1000 pounds, but they make up for it in looks and acrobatic leaps. 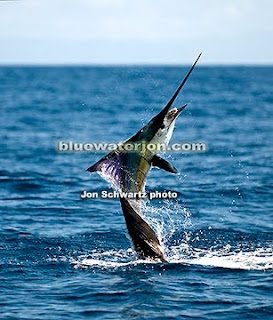 The Spanish term for them is Pez Vella: beautiful fish. Their fanlike dorsal fins make them instantly recognizable, and when they're excited, they flash iridescent mixes of magenta, red, yellow, and aqua hues. 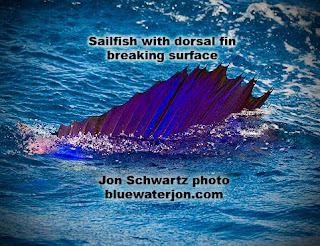 At other times, they assume dark tones, allowing them to sneak up on prey. 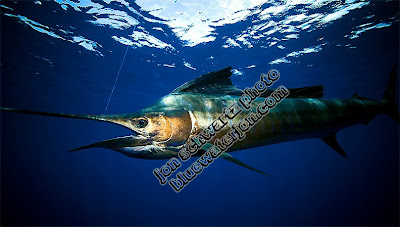 That's what makes the one that Matt Dye just caught off Cabo San Lucas so incredible. On Saturday, Nov. 28, Dye landed a ghostly white albino sailfish, which may be truly one of the rarest billfish catches in the world. And yes, the eyes were reddish pink! This fish must have stuck out like a sore thumb in the ocean!How on earth a fish of this size, with no ability to blend in, managed to survive in the wild remains a mystery for the moment; marine scientists will no doubt start chiming in with theories and insight in the coming weeks.

Matt, who hails from Alexandria Virginia, came down to Cabo to visit with Bob Gist, his wife Sharon, and Linda Daniels. Though they've all known each other for over 20 years, they see each other only occasionally, and decided to vacation at a Cabo time share owned by one in the group.

They contacted Tracy Ehrenberg, owner of Pisces Sportfishing Fleet, and indicated that they'd like to charter a luxury yacht for fishing. Tracy put them on the Get Over It, a 54-foot Bertram captained by Jobe Villavicencio, with brother Javier working as the mate. Jobe has become one of Cabo's most sought after captains, known for such feats as catching and releasing 197 striped marlin in one day in 2008, and in fact, the two are current World Offshore Champions. 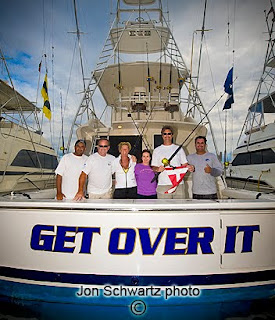 Though most of the boats had been heading north of Cabo's marina to load up on dorado (aka mahi-mahi), Bob suggested that they try for marlin and head straight out to the "6000 line", where the depth reaches, uh, 6000 feet. Evidently, that's about 15 miles out. Just before they reached the area, they saw what they thought was a marlin free jumping, so they ran the boat over to the fish and threw out a live bait to the fish on 30-pound tackle.

The fish took the bait, a battle between angler and fish ensued, and eventually Matt brought the fish to the boat. What began to appear from the depths shocked everyone aboard. Bob Gist watched the strange sea creature emerge with astonishment. "When it was coming up, it just looked...weird..and I was like, where the h-ll is the color?!... and it kept coming and then I thought it was a shark! And then I said, it's a billfish!...and it's a sailfish! and I was like, sH#@!" 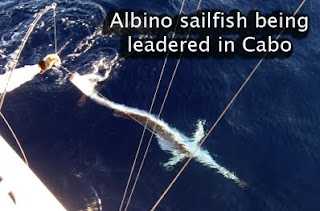 "It almost looked skeletonly from a color, and it was just all white, the tail was more so than the bill, and it was incredible!" 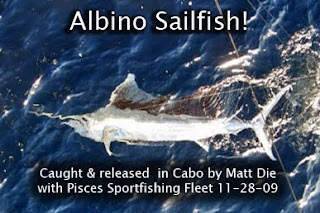 I asked Bob what the crew’s reaction was like. "They were flipping out because they've never seen anything like that in their lives, and they started looking at the eyes, and the eyes were red and pink, and they started hollering out albino, albino, and then they called into the marina, and that's when we learned that it was a special thing.”

What actually happened was that Captain Jobe had called Tracy and told her that they had landed the bizarre fish, and they wanted Tracy's advice on what to do with it. Pisces has earned a reputation as one of the most conservation minded charter operations in the industry, and is a strong proponent of the catch and release of billfish. For her, the decision to release the fish would usually be a no-brainer, and they would have usually left the fish in the water, but since the fish was so unusual, the crew thought they had better ask Tracy and take some pictures. 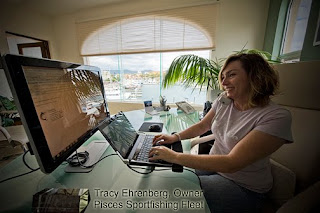 Tracy Ehrenberg at her office overlooking the Cabo Marina

Tracy has even been training her crews to learn how to obtain scientific samples that are given to several trusted marine scientists she knows. She's one of many that feel that Cabo may in fact be a breeding ground for billfish. If this theory can be proven to the government- if enough billfish larvae are collected while skimming the surface for plankton- the area will be closed to commercial fishing, and billfish stocks will be safeguarded from longliners. This is her ultimate goal.

Ehrenberg said that although she knew the scientists might be able to obtain valuable data from this one unusual fish, she also wanted to honor the client's wish. Matt knew that if he wanted to get a mount made of his amazing catch, he didn’t need to kill it. These days, taxidermists make replicas better than ever before, based only on a photo of the catch. Matt was committed to letting the fish go, but now they had a problem: after the fish was brought aboard for a photo, it was exhausted, and releasing it in good health proved to be difficult. 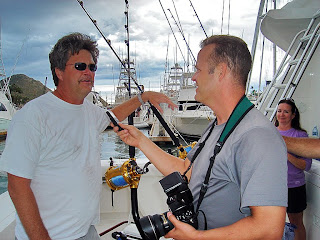 The fish wasn't able to swim off by itself after placing it back in the water, and Matt and his friends became worried it might not make it. The anglers and crew got so caught up in the revival effort that they came up with a most unusual plan: mate Javier volunteered to be held over the transom by his feet so he could hold the fish’s head underwater, and his brother, captain Jobe, would slowly move the boat through the water to run fresh water over the fish’s gills. Incredibly, the plan worked! The fish regained it's strength and kicked off by itself, and everyone aboard cheered with relief.

Matt Dye should be given a big hand for making the decision to release the fish, and the crew of the Get Over It should be commended for their valiant efforts. Well done!!!

Interestingly, The Billfish Foundation (TBF),  a nonprofit organization founded to promote the health of billfish stocks worldwide, has actually come up with a helpful set of guidelines that are geared towards educating us anglers on releasing fish in a manner that puts the least amount of stress on the fish. They recommend that the billfish be left in the water at all times. Several publications and websites have written articles on how to properly release billfish, and as I come across them I will post them here. In the meantime, if you know of one, please contact me throught my website, listed above. 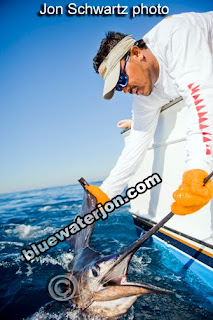 Personally, I have seen several methods employed that seem to work really well. Different methods work for different sizes of fish, types of line, sizes and types of hook, and so on. There's the school of thought that it's better to leave the hook in the fish (this also depends on where the fish is hooked). Sometimes the anglers will use light line and when the fish gets close to the boat, the mate will simply yank the line tight very quickly, causing it to snap at the knot on the hook. The fish usually simply swims away without even ever touching the boat. This was used about 50% of the time that I accompanied Pisces fishing charters.

At other times, I have seen mates leader the fish to the side of the boat, grab the bill, and remove the hook. With larger fish the captain will often come over and remove the hook with an ARC Dehooker, a device made specifically for the safe and effective removal of hooks in fish. I spent a month in Kona watching some of the world's best captains like Marlin Parker and Gene Vanderhoek catch and release 600 pound blue marlin without barely blinking an eye, it seemed, and both fellows and their mates made used dehooker tools to great effect.

In Guatemala, they seem to have the greatest sailfish numbers on earth. When I was there last year in December, they were releasing 30 plus sails per day, per boat. No joke! Check my website for the article I wrote on it in the "Articles" section. There, what they do is they have a long stick with a line-cutting tool attached to the end of it. They use very thin wire circle hooks, similar to the ones the Pisces Fleet uses, and when the fish gets close to the boat, the mate grabs the leader and cuts it right at the knot where the hook is in one deft motion.

As a sport fishing photographer and writer who shoots above and below the water, my own observations have led me to conclude that there are a great many mthods that are successful in promoting healthy billfish releases. I actually took this next photo aboard the Rebecca, another member of the Pisces Sportfishing Fleet. It shows one of the clients, Dan Ryan, releasing one of the 4 striped marlin that was landed that day. When the fish are calm enough and the situation is right, sometimes the anglers can even join in the fun! 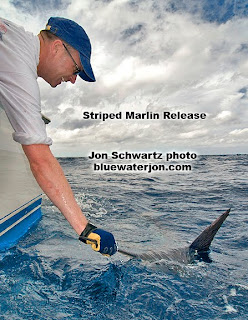 Of course, usually the mate is the one handling the fish at this point, but Dan has been coming back to Cabo for many years and befriended the captains and crews at Pisces to the point where he likes to take over as second mate. In fact, he had dinner for two nights in a row at Captain J.R's house, but that's another story..!
Posted by Jon Schwartz at 8:47 PM