Fishing for marlin, tuna, and spearfish with Captain Teddy Hoogs and Bwana Sportfishing

Teddy Hoogs is a top-notch big game fishing captain on the Kona Coast of Hawaii's Big Island. Check out him pulling this 130 pound tuna into the boat that his clients recently caught! Teddy has an excellent reputation among other Kona captains and mates, and he has a lot of experience with giant blue and black marlin in Hawaii and Australia's Great Barrier Reef. Over a decade ago Teddy “wired” the fourth largest giant black marlin ever caught in Australia, a huge 1,389 pound monster. For laypeople, this means he grabbed hold of the line attached to the surging fish when it got close to the boat. I can’t imagine grabbing the reigns of a wild animal well over 1000 pounds! Not for the faint of heart, but every mate’s dream. He soon became a captain and rose in the ranks at Kona’s Honokohau Harbor.
Captain Marlin Parker, one of big game fishing's true legends, called Teddy "One of the best in the business". The thing I like best about him is that he's managed to stay super friendly and humble while skippering some of the choicest boats in Kona, which is arguably the blue marlin capital of the world. Teddy now operates the “Bwana”, a luxuriously appointed 46' Gamefisherman outfitted with an ungodly amount of power: twin Cummins QSM11twin diesels with 710 horsepower per side for a whopping 1420 total horsepower. It's one of the fastest charter boats in the harbor, and when Teddy was putting it through its paces upon it’s delivery to Kona, some jaws dropped. It’s one serious boat!
His father Peter Hoogs is one of the old time greats of Kona big game fishing and took the eager Teddy under his wing from a very early age. Check out this picture of Teddy as a toddler reading renowned fishing author’s Jim Rizzuto’s “Fishing Hawaiian Style”! I've had the pleasure of riding along with Teddy while taking big fish photos for my fishing photography work and wrote an article about him for Marlin Magazine in March 2010 called "Lure Magic: Kona Capt. Teddy Hoogs Learned from the Best".


About ten days ago I accompanied Teddy with one of his charter clients, the Vandrie family from Carefree, Arizona. Mate Joe "Kaiwi Joe" Thrasher usually crews with Teddy, but Joe had taken out Teddy's new commercial fishing vessel and landed three big yellowfin ahi tuna by landline the night before and arranged for Brian Shumaker to replace him this day. In fact, we passed Joe coming in with his fish on our way out of the harbor at 6:15. Those are some tough hours! Here’s a picture of Joe Thrasher. The Vandries were super friendly and it was interesting to hear about the father Jeff Vandrie's experience as an iron man triathlete. About 90 minutes into the trip while heading south, a huge boil exploded behind one of the lures in the trolling pattern. Two rods went off simultaneously, two reels are screaming, and we've got a double hookup! Because neither fish jumped and they struck at the sometime, it became clear that we'd stumbled upon a pair of big yellowfin tuna, known as ahi in Hawaii. The ahi bite has been better than it had been in years and I was stoked to see that it was still on fire. There's not too many places you can hook into 150 pound tuna within 5 miles of shore so fishing in Kona is a special treat. Here's a photo I took last year of a big yellowfin ahi tuna chasing a lure that made the cover of Bluewater Magazine: Jeff manned the fighting chair and his neice Abby Hansen fought  the other fish from the side. While swimming next to the boat I took some neat photographs of the duo both hooked up, and also of the big fish swimming in the incredibly clear blue water. Jeff reeled his ahi in first add then Abby managed to battle hers in as well. After posing for some pictures of their 'wicked' tuna, mate Brian Shumaker set all the lures back into the spread.
The next fish to hit pulled line off the reel but by the time Jeff manned the chair, he thought it had come off..until it started to pull line again. This on again, off again pattern repeated itself unti Teddy identified it as a shortnose (or short billed) spearfish. In truth he may have seen it hit the lure; he's got his eyes trained on them all day and sees most every critter that pops up near the lures, regardless of whether it strikes.

Short nose spearfish, which are called "Chuckers" in Hawaii, are the world's smallest and rarest billfish. For anglers hoping to achieve a Billfish Royal Slam by catching one of every species of billfish, the short billed spearfish often proves to be the most elusive. It isn't found in numbers in many areas other than Hawaii and even then, it's somewhat of an uncommon, incidental catch.
I wrote an article for Marlin Magazine in February of 2010 called "Spearfish Skippers: A Talk with Hawaii's top Spearfish Captains" that detailed how anglers come from all over the world to Kona to catch these fish, which are most fun to catch on light tackle due to them topping out at about 70 pounds.  Getting good pictures of spearfish is also hard because they don't jump alot; one of my luckiest moments in photographing fish underwater came when I swam with a shortbill several years ago. The captains I featured for the story were Guy Terwilliger, Marlin Parker, and Gene Vanderhoek.
Shortnose spearfish are also good eating- they're called Hebi in Hawaiian fish markets-but the Vandries were all about catch and releasing billfish and the fish swam away in good shape after being leadered by the mate. For all we know it was devoured shortly thereafter by a big blue marlin, which have been known to swallow spearfish whole!
About midway through the day Teddy’s lures attracted another strike from a blue marlin, and Vandries again found himself in the fighting chair. The day was only half over and Bwana Sportfishing’s anglers had caught two big tuna, a spearfish, and a blue marlin! I didn't get any good photos of the marlin jumping, but here is a picture I took in Kona of a blue marlin that made the cover of Marlin Magazine a couple of months ago: Here's another photo I took of the same fish. This shot became kind of well known. 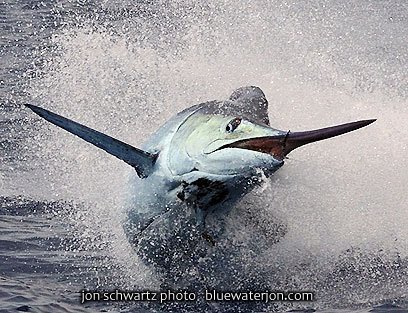 Incredibly, the big fish action wasn’t over. In the last 5 minutes of the charter, on the way back the harbor and only a mile offshore,  a reel went off and a blue marlin started doing aerial acrobatics off the stern. Back into the fighting chair for Jeff Vandries! Teddy maneuvered the boat effectively to allow Jeff to wield maximum pressure on the fish and after a fun fight, the blue was brought alongside the boat for tagging. Here's a picture I took of it swimming near the boat just prior to release. All in all it was a great day fishing for the Vandries family, Bwana Sportfishing and Teddy Hoogs. Total fish count for the day: two 100 plus pound tuna, two blue marlin, and a spearfish. I was fortunate to be there to take photos of all the big fish action and I'll be sending the VanDries family some pictures to hang on their walls. Yet another fun day on the Kona Coast with good people and plenty of fish!

If you enjoyed reading this article and would like to see more fishing photos, please go my Facebook page Jon Schwartz Fishing, Photography, and Travel and "Like" it by clicking HERE. I periodically have photo giveaways worth $400 and post a lot of neat content there. Thanks, Jon Schwartz
Posted by Jon Schwartz at 2:00 AM