Check out my yellowfin tuna picture on the cover of the new issue of Bluewater Boats Magazine! I do a lot of fishing photography on the Kona Coast on the Big Island of Hawaii. Last summer I fished with Captain Russ Nitta of Lepika Sportfishing chasing Ahi (the Hawaiian name for big yellowfin tuna).
He caught the 130 pound yellowfin tuna featured on the cover trolling a custom Hawaiian lure head made by Ronald Shiroma. Russ likes to skirt it with blue and silver over pink and white. For ahi, Russ uses 300-400 pound test Momoi Extra Hard leader, with leader lengths between 18 and 24 feet. His reels are all Fin Nor 80's and 130's, matched with custom Ian Miller rods from Australia.
I had originally booked time with him because I wanted to see him catch huge tuna with an interesting contraption known as the "green stick", but we had better luck trolling lures.
Captain Nitta on the Lepika, a 33' Force built in Hilo. I'm thrilled that my photo was featured on the cover of Bluewater. Editor Tim Simpson runs an awesome publication that is cherished by big game anglers worldwide, and I hope his readers will get a kick out of this tuna pic. Below is a photo I took of a sailfish being released in in Guatemala that made the cover of Bluewater awhile back: 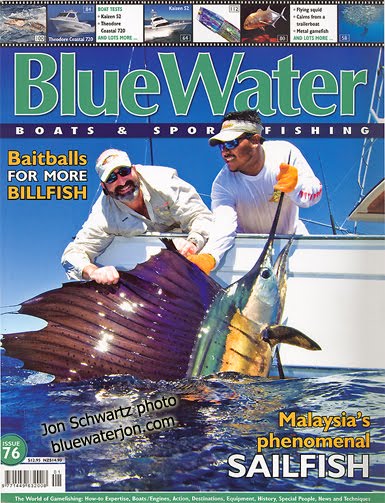 Good to see the updates here.