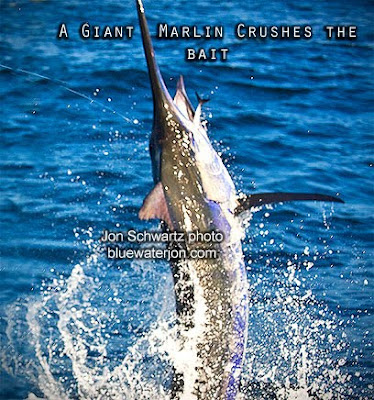 Hi Jon Schwartz here, welcome to the official blog of the 2010 Hawaiian International Billfish Tournament (HIBT) Blog. Anglers are coming in this weekend from all over the world to Hawaii's Kona Coast,  the "Land of the Giants,  to troll the deep blue waters in hopes of hooking giant marlin that can reach 2000 pounds! 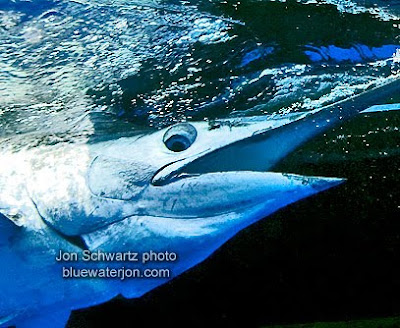 I just flew in to tournament headquarters this afternoon and I'm super excited about being able to witness this historic event, which will actually start Monday morning. I guess last year's event was the historic one, as it was the 50th anniversary, but let's hope this one makes history for big fish mayhem and fun. It sure has the potential! I've covered the HIBT for the last two years and spent many additional weeks on the water with captains and anglers gathering photos and fishing content. Prior to covering the HIBT as a journalist I spent many fishing trips of my own here, learning about what makes this such a special big game fishing destination.

One aspect is that big pelagic game fish seem to like being in clear deep blue water that has lots of bait that they can feed on. Kona has that, for sure. It gets so deep so quick here that you can be 100 feet off the jetty, and be in 250 feet of water or more. 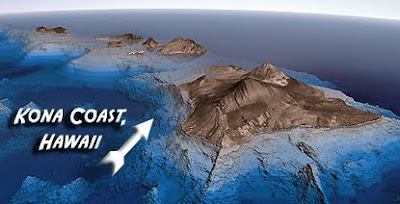 Check out this illustration that I got and put a label on, showing where the Kona Coast is. You can see the steep dropoff points. No need to motor out to where the big ones lie- they are right there within 1/4 mile from shore at times. In addition, this is the leeward side of the Big Island of Hawaii, as opposed to the windward side. I am not going to say that there is no wind because if I do, that might jinx everything and we'll be blown off the water on Monday, but for the most part, let's just say that this is not the windward side...
If you want proof that huge fish can be caught within a stone's throw from shore, check out this picture of a 64.5 pound giant trevally ( Ulua in Hawaiian) that I caught at the mouth of the harbor, about 50 yards off the jetty, about 5 years ago here....on a kayak! 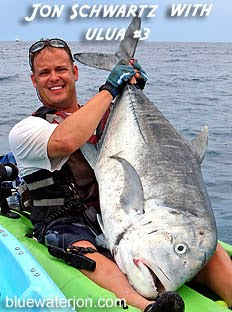 It says "Ulua #3" on it because it was actually the third one that I caught in three days, if that's any indication of how good it can get here. So if you can't tell, I've been sold on this place as a big fish mecca for awhile now.
Now let's talk about the bait. There's tons of it here, and you wouldn't believe the sized of the baits that they use to catch marlins with. They catch tuna that others would be happy to catch for trophies, and then put a hook through them and wait until a monster shows up and engulfs it. I don't have any good pictures of this, but I do know that when a 1800 pound fish was caught on many years ago, it coughed up a 150 pound tuna that it had just eaten. We'll have to do with this picture, which shows a regular sized bait. 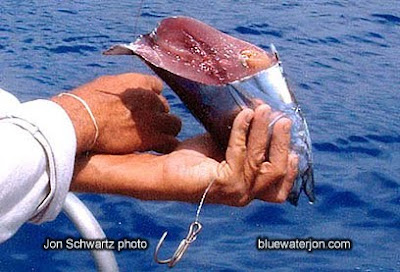 Notice that it's been sliced in half? Well what happened is, the aku, or skipjack tuna that had been caught and then thrown out as bait with a hook on it had been sliced clean in half by a wahoo, another fish that lives around here with razor sharp teeth. Wahoo had kept eating all our baits so we put a trap hook- another hook that dangled towards the back of the bait, but the wahoo ( ono in Hawaii) was wily and cunning enough to come in for his attack and take away half of it without getting hooked!
Of course with such big baits, and bigger predators eating them, you need beefy equipment. 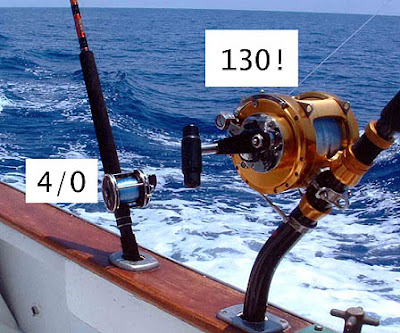 See that "4/0" reel there on the left? That's actually a very big reel, big enough to catch a 200 pound marlin. I brought it over here on my first trip to Kona and they laughed when they saw it, because they usually use the biggest reels made in the world- 130 pound test reels. They are bigger around than a coffee can and can withstand the torque required to tussle with the beasts that roam these waters.  People in Kona can choose to use lighter tackle, which will be fun for smaller fish in the 20-50 pound range, but if a 500 pound marlin comes along, let alone something three times that size, they are going to get "spooled"- which means that the fish will take all the line off the spool and leave them dry and sorry they had underestimated the potential of this place. 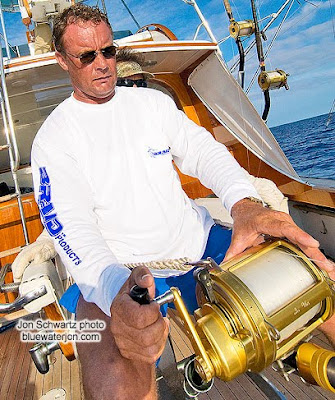 I'm pretty sure there are 35 or so boats in this year's tournament. Each boat will be manned by one angling team, and the cool thing is that the teams have to rotate among the boats, so no one gets to have their favorite boat the whole time- it's done by random drawing. On Monday just before the tournament starts, the boats will line up at the Kailua pier, collect their anglers, and then at precisely 7:00am  (I think it's 7:00, I'd better check!), they are given the green light, and they scatter in all directions, hoping to be the first to hook up. 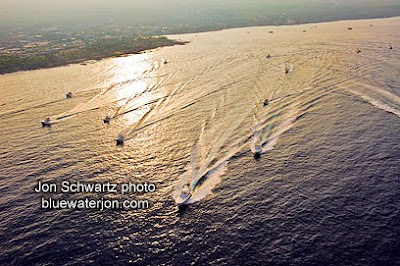 I'll be getting in the press boat, hoping to watch other boats as they are battling jumping marlin. I took the above photo from a helicopter last year at the start of the tournament. A really wild thing happened about two minutes after I took this photo. I told you that big fish can be caught close to shore, right? Well while I was in the chopper, we were making our last fly over for photos like the above one. Out of the corner of my eye I saw a boat going backwards. That seemed strange to me, here we are in the first couple of minutes in the tournament, everyone is streaming at full speed for gosh knows where, and one boat is going in reverse. Could it be???
I told the chopper pilot, "Follow that boat!!" and sure enough, this boat- the Marlin Magic, owned by captain Marlin Parker and skippered by Jason Holtz, was indeed hooked up to a big fish and was backing down on it so they could get to it and tag and release it.
Right when we get on top of the boat, the most amazing thing happened: the fish, a marlin, jumped out of the water and started greyhounding off the stern of the boat! 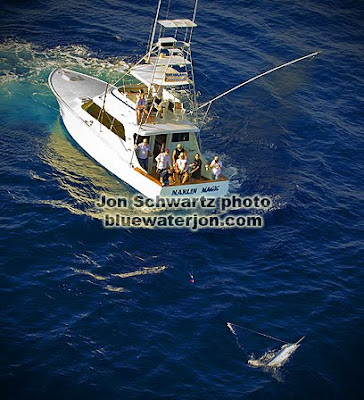 Luckily I was able to catch it all on camera and I got what are probably some of the rarest fishing shots in the world. I say that because I think it would be prohibitively expensive to rent a chopper and hover around until a boat hooks up. It can take two minutes, 4 hours,  or all day with nothing, you know? It was all luck and I'm grateful that I had that opportunity. Within minutes they had the blue marlin o the side of the boat, removed the hooks, revived it and let it go. And that was all in the first 15 minutes of the start of last year's HIBT! 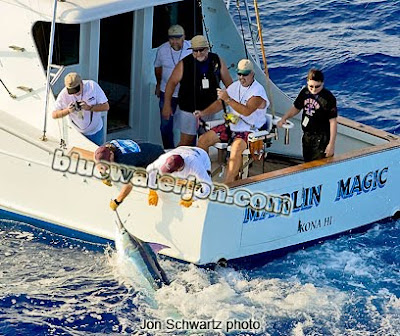 Later on in the month I spent some time accompanying Captain Marlin Parker himself, who granted me an extensive interview about his life and experiences. I'll be writing a series of articles on him for Bluewater Boats magazine about Marlin Parker based on these interviews with the first one coming out soon. Here's a copy of that magazine with a picture I took of a fellow releasing a sailfish in Guatemala: 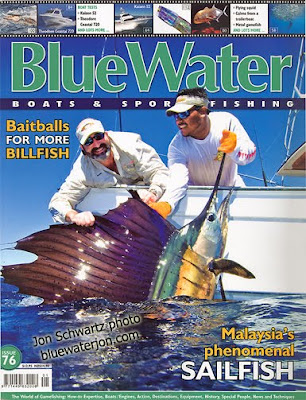 Check back in a couple of hours; after I get some sleep and have breakfast I'll continue blogging, and soon enough the tournament will be at hand!
Posted by Jon Schwartz at 11:18 PM

Welcome back to the Big Island! Look forward to your updates from Kona!