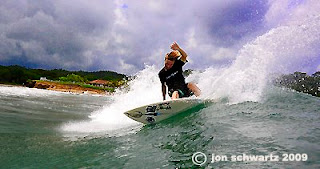 I just got back from Nicaragua. I had a BLAST. I was there to get images for a travel destination feature that I am writing for Marlin Magazine.  The fishing was fantastic; there were TONS of sailfish , and I got some really epic fishing shots that will make for a great article. Until the article comes out, I need to refrain from discussing the fishing , but if you want to see what they catch down there, go to Surfari Charters' site  www.surfaricharters.com.
The surfing was also epic. Not that I surfed- I was too busy taking photos. In fact, I got to do something new: take pics with my underwater housing in the surf. I can't wait to do more! 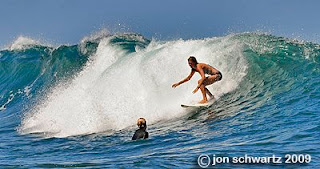 Basically what you do is you hang out in the impact zone, where the waves break, and the surfer comes straight at you, and veers off at the last second. I think I'll only be doing this with people that know what they're doing! The above photo was actually taken from a boat, but for the first one, Captain Lance Moss, owner of Surfari Charters was actually really close to me. 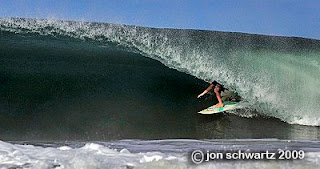 I took the above shot from the beach. I must say, Lance has assembled an awesome crew down there; each staff member was super courteous and helpful. They could put you on a sailfish in the morning and then snag some waves in the afternoon. Plus his chef was killer. The chef is a native Floridian who had been formally trained in the US at culinary school. I can't wait to return!
Posted by Jon Schwartz at 11:42 PM