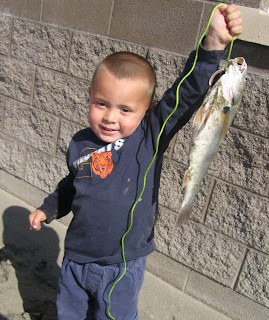 Besides making gobs of money, teaching provides me with a very important resource- a captive audience of inexperienced and impressionable people who are easily impressed. My students get bored of my fishing tales by the October, so I begin to take them on local fishing trips with their parents(those who aren't deployed- these are military kids).
For example, I had this kid named Kasey Brunot. He was so far above grade level in reading that we spent the time reserved for reading assessments chatting. Turns out the kid was as stoked on fishing as I was! His grandpa had moved in with his mom to help out while dad was deployed, and gramps had been passing down a whole lot of key surf fishing know how.
All through the winter, I kept telling Kasey that the three of us would have to go kayak fishing; if he thought those 3 pound corbina put up a fight, wait until he felt a 20 pound yellowtail towing his kayak around! Just before spring break, I told him that if the annual white seabass and yellowtail bite hit, I may just be giving him a call.
Sure enough, three days into vacation, I find out that the squid had come through in great numbers, attracting gamefish that inhale them up like Pez. I called Kasey's house, and told his mom that the time had come for us to reap the bounty of the high seas! I ran out and borrowed a kayak for Kasey and his grandpa Chris Brunot (who's only 50 years old), and got Kasey a used wetsuit and some other foul weather gear.
We'd be trying to get our own squid out on the water before dawn, so I picked up the duo at their apartment at 3:00 am. Any doubts as to whether Kasey and Chris were ready were dashed when I saw them both scurry down the steps at exactly 2:55 with a spring in their steps. 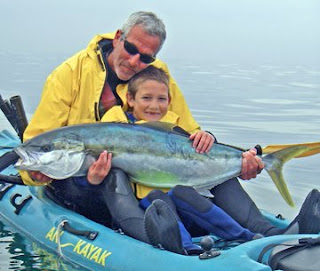 I'm going to cut to the chase here, because I want to save this story for an article I plan to write for a publication, but basically, we had a WILD time. We weren't able to make squid but we were given some, and we eventually landed a nice 27 pound yellowtail. Kasey was in hog heaven, and Chris, who had been fishing from boats and beaches since he was 5, was hooked on kayaking as well. BIG fun! 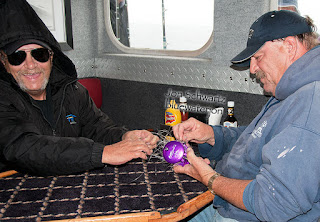 For more info on this pic go to this site here.
Posted by Jon Schwartz at 10:20 PM